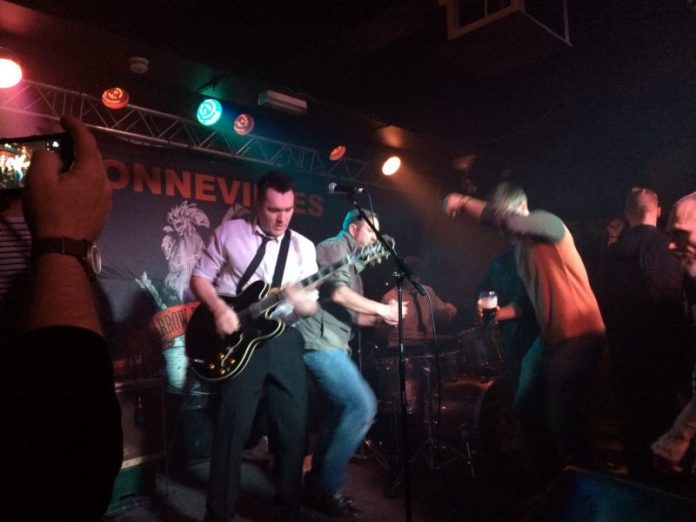 Some things we learn before The Bonnevilles even get to the stage:
1)Whoever chose the Presidents Of The United States Of America debut album as the pre-show music is a genius.
2)It’s amazing how many of the songs on it that MV still knows word for word

What we learn when The Bonnevilles hit the stage – in their sharp, matching shirts, ties and suit trousers.
1)The Zephyr Lounge is their favourite venue to play in the country (“we play some shitholes,” grins singer Andrew McGibbon Jr. “And this is the best.”)

Since they were last in these parts a year or so back, the pair – completed by drummer Chris McMullan, a man who gives his kit a battering as if he really wants to hurt it – have released the quite stunning “Arrow Pierce My Heart” record. A fair smattering of tonight’s intense 70 minute show comes from it, but they kick off with the title track of their 2010 opus “Good Suits And Fighting Boots” and it sets the tone for what follows. It’s simply superb, drenched in slide guitar, and as stripped down as you like. This is music with almost nothing extraneous attached, it’s lean, it’s very mean and it seems to channelling something primordial from deep within.

The new material works exceptionally well. “My Dark Heart” and a wonderful “The Whiskey Lingers” slot in seamlessly and “Who Do I Have To Kill To Get Out Of Here?” would likely be dedicated to the….let’s call them enthusiastic….people on the front row if McGibbon Jr had his way. The older songs thump and crash and are delivered with a passion that can’t be faked. “Son Of Reverbio” and “Kneel At The Altar Parts 1 and 2” are particularly impressive here. MV’s favourite from the new record, “The Electric Company” is a highlight too, and the irony of the line “it’s too late to die young” is lost on no one as its nearly midnight when it’s played.

Things end in raucous fashion. After a “Get Myself A Gun” brings with it a hint of punk sneer, the audience are invited onstage for “Hardtale Lurgan Blues” which concludes like best bar fight you ever saw.

The Bonnevilles might be one of the finest delta blues bands on the planet – happy to cover R L Burnside’s “Poor Boy”, but they are so much more. On record they are excellent. Live however, they are truly formidable.

Here’s something else we learned while The Bonnevilles were onstage: Nobody does this primal blues thing better.