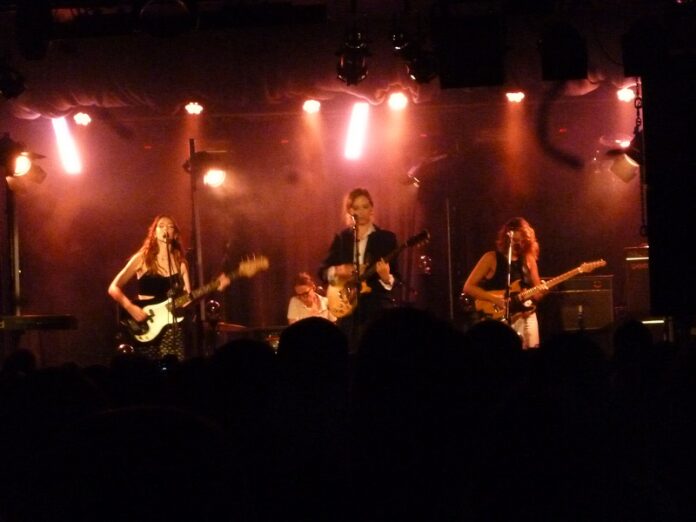 Their third album `Here Is Everything` already in the can and about to be unleashed next month and a fifteen date trek of the UK in support of said release about to start, what could go wrong for London based indie quartet The Big Moon? A trip to Galicia in Spain for a festival only to arrive back with most of your equipment still stuck there. A shout out for help on social media and here we are on day three in Birmingham.

There`s minimal fuss as the band ease us into tonight`s show with `It’s Easy Then` a fairly ethereal number that really blossoms into life in a live setting. `Take a Piece` has everybody singing along before `Don’t Think` blasts out with a fairly pounding quite hypnotic disco tinged beat.

The irony of the group`s equipment loss isn`t lost as `Barcelona` is aired with flutes mimicked vocally before a vigorous working of `Cupid`. We get to hear a few new songs that are on the forthcoming release with a song written about receiving a positive pregnancy test with `2 Lines` which bursts into life and sets off a kind of mirror ball effect. `Wide Eyes` is a track I can`t stop playing and is every bit as good live. `Daydreaming` is the final taster of the new album and a track that was written about breastfeeding. Juliette had a baby since the last album and a few of the songs on the recent release are inspired by this life changing event.

The home stretch includes a cover of Fatboy Slims “Praise You`, `Bonfire` a fairly forceful offering which does ignite this packed audience before closing with the equally threatening `Trouble`.

We have a brief lull before the quartet return for a stripped down `Waves` and end on the positive `Your Light` a delightfully uplifting number to send us all home on.

Juliette Jackson, Soph Nathan, Celia Archer and Fern Ford who make up The Big Moon seem to be on the cusp of something big and proved tonight that despite not having all their own instrument, they managed to put on a melodic, engaging and well thought out performance. This six hundred capacity venue wasn`t far off a sell out on minimal publicity so who knows where the next phase will take them.