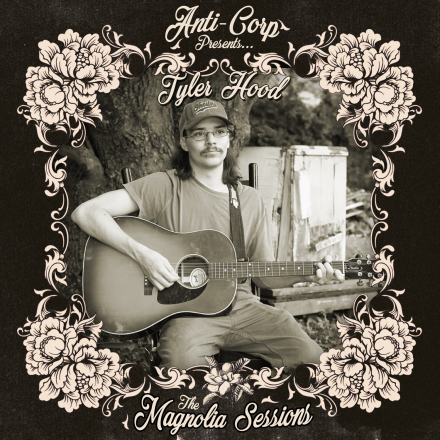 The wonderful Anti-Corporate Records’ The Magnolia Sessions is now in its third season and this month presents its latest instalment, releasing a new record by Kentucky-based folk singer/songwriter Tyler Hood. Once again this release is recorded in an intimate outdoor setting at the Anti-Corporate Music/Black Matter Mastering headquarters in Nashville, Tennessee. Tyler Hood is an artist who writes with humour and candour and he covers subjects from ballads of rural living to refreshing tales of ordinary everyday life.

This session opens with `Kentucky Heartbeat` with a strummed acoustic guitar as the singer relays a tale of boy meets girl, they have a child together but their volatile relationship cannot survive them living together. The father could take off and would if there wasn`t a child to consider so he lives some distance away, works hard and tries to come to terms with the cards that life has dealt him. There`s a deep honesty in the lyrics and you can`t fail to have empathy with the story`s protagonist and hope for the best, while fearing the worst. There`s a much faster pace with `Better Days` which seems to be the story of somebody looking to return home after realising that where his life has taken him isn`t the “promised land”  that he expected.

`Under Your Tree` is a melancholic saga of somebody down on their luck whose only solace seems to be the reflections of a partner whom they shared more contented times with but is no longer around. They return to a tree which is the focal point of happier times and holds those carefree memories. I felt that `Day Tomorrow Ends` was almost a self-written eulogy to a former lover to coerce them to feel regret or guilt if they depart this mortal coil.

We have in `Bulldoze My Love’ a song filled with desire for somebody who is more than likely unobtainable but seems to consume all of the storyteller`s waking thoughts. There`s a similar sentiment ion `Julissa` but this time the subject of their yearning is probably obtainable but the narrator is unable to convey their thoughts to words into actions.

The heartbreak shared in Tears And The Wine` is almost tangible in this tale of realising that a previous romance, isn`t the kind of situation to return to with happy conclusions for either of the participants involved. There`s a feeling of inevitable catastrophe on `Softball Game` where the narrator hints at a planned course of action that will have significant consequences for not only themselves but others.

This release closes out with `Patriarchy  Song` which may well be a parody on misogynist thinking but maybe I was reading too much into it.

I cannot describe as to how much I enjoy these Magnolia sessions and once again Tyler Hood has managed to retain the high standard that we`ve come to expect from these recordings. The intimate outdoor setting where you can hear the competing crickets and cicadas and the distant traffic on the highway all add to the ambience.

Tyler Hood has a warm and captivating vocal range and delivers tales that will at times have you sitting there contemplating the lyrical content of what he shares long after the number is finished. To me he`s a real working man`s poet.

Take a listen and i`m sure you`ll agree.