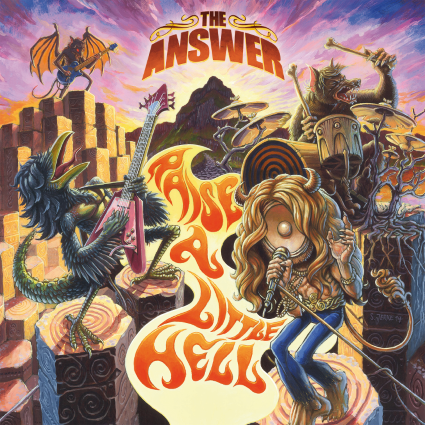 Sometimes it’s all in a name. And to be fair, you always kinda think that The Answer’s album titles are hinting at things. Their debut was “Rise,” then we had “Everyday Demons.” There was a rebirth with “Revival” and a sense of longing on last time outs “Lost Horizon.” So “Rise A Little Hell” tmust be a party record, right?

Well, yes and no.

Certainly opener “Last Of The Renegades” is a good time tune, coming on like Elvis Costello’s “Pump It Up” before a glam rock guitar line, and tracks like “Aristocrat” and “Whiplash” are just good fun, but there’s a lot more going on here than you might first realise.

“The Other Side” is almost like a turbocharged Creedence Clearwater Revival track, with an enormous hook, while “The Last Days Of Summer” is quite unlike anything they’ve attempted before. A sprawling, The Doors-esque freak out, it possesses a menacing side we don’t often associate with The Answer. It is a fine song, one which you imagine they will enjoy playing live, where it just might be jammed into something even more intricate.

There are a couple of real moments of tenderness here too. “Strange Kinda Nothing” is a warm, summery, acoustic driven tune, with a touch of country about it, while “Cigarettes And Regret” isn’t far from being the best moment on “…..Hell.” It sees the band rake over a relationship that’s broken beyond repair. Singer Cormac Neeson – who does an admirable job throughout – is at his brilliant best here, as he ponders “another heart gone dead cos of three words said” before concluding that “the Devil’s spoken but the words came out of my mouth.” It is a magnificent song.

Elsewhere “I Am What I Am” is not only a statement of defiance, but also an AC/DC song that is the better of most of the legend’s recent patchy “Rock Or Bust” affair. And is if to prove that this, after all, is a good time album, “Red” has a positively dirty groove.

There is even a nod to that magnificent debut record from all those years ago, the gospel tinged “I Am Cured” takes “Preachin'” from that record, soups it up, gives it a glam rock sheen and sees it become something quite special.

By the time things end, with the low down bluesy hook of the title track, you are left reflecting on a job very well done. Although over the years The Answer have made a stack of wonderful records, and although the influences of those classic bands of the 1970s are still evident, “Raise A Little Hell” is the first time for a very long time that they’ve managed to capture the excitement of their live show in the studio.

Raise A Little Hell is out on Monday via Napalm Records