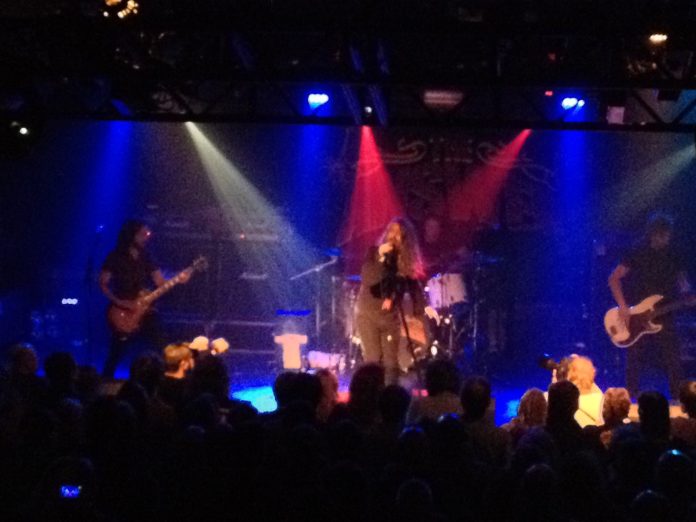 The Answer leave the past behind to raise a little hell


There is something gratifyingly primal about two piece bands – but that’s even more the case than usual with The Picturebooks. The German duo are seemingly here to bash the crap out of everything in sight. Essentially it goes like this. Philipp Mirtschink thumps his drums like they’ve offended him and Fynn Claus Grabke plays a mighty riff over the top, while wailing at the top of his lungs. Lord knows what about, but that doesn’t matter. Music this visceral doesn’t need explanation. Imagine the Graveltones mixed with some stoner rock brew and you are somewhere close. Closing tune “Your Kisses Burn Like Fire” is typical of the heavy blues alchemy here. The Picturebooks are captivating in the extreme.

Norfolk’s Bad Touch always bring the hard rock swagger and lots and lots of touring mean they are superb at it. Singer Stevie is made for the job of frontman and now, with a debut album finally about to drop, things are set fair in the world of Bad Touch. “Wise Water” on its own convinces that the record will be worth the wait, while the likes of “Waste My Time” and the balladic “Words I Never Said” getting better with age. The new album’s title track the bluesy “Halfway Home” hits the high points and the Black Crowesish “Good On Me” (dedicated to “fellas who like to wear women’s trousers”) is riotous fun. A band who’ve been hotly tipped for a long time and who are surely ready to breakthrough.

This is not a setlist that has, you suspect, been put together without thought. The AC/DC-esque strains of “I Am What I Am” which kick things off tonight, give way to the widescreen dreams of “Spectacular” and you can almost feel The Answer saying: “Hello world. We are still here and we aren’t going anywhere.”

The defiant Northern Irish mob keep kicking down doors even after a decade and are re-entering the fray with “Raise A Little Hell” which is not only very, very good indeed, but is selling like the proverbial hot cakes. With good cause too, as the filthy grooves of “Red” prove.

Although tellingly there are few songs from their brilliant debut album “Rise” – largely retired after nine years for this run apart from the brilliant delta blues of “Preachin'” – this is not a show that neglects history and “Demon Eyes,” from their second record, sounds re-energised here.

Considering their relative age, the “…..Hell” tracks fit into things like a comfy pair of slippers, “Aristocrat,” with its harmonica groove, coming alive in this setting. However, it is another new song that provides the highlight – arguably anyway. “Last Days Of Summer” as you always suspected it would be, is turned into something trippy and thrilling.

The lilting ballad “Strange Kinda Nothing” sees drummer James Hickey venture from behind the kit and guitarist Paul take to a stool, before a pleasing crescendo crashes in. The brilliant “New Horizon” takes things up a notch still further, it’s line “give me a chance to win” delivered with real feeling by Cormac Neeson, who is at his Jack-in-a-box best throughout.

The title track to “Raise A Little Hell” is suitably raucous and sees Cormac stride purposefully into the crowd, to lead what is very much now his congregation in celebration. It makes for a startling conclusion to the main set.

When they return its with a revved up “Evil Man” and the catchy “Nowhere Freeway” (which won an online poll amongst fans as to which song they should play on the tour). With that The Answer are off to the bar to sink a few and reflect on a job very well done.

A band that’s proud of its history but very much living in the present and looking to the future, The Answer sound better than than ever. Like they say themselves: It ain’t got a heart if it ain’t got a soul.

Tonight The Answer prove they have both in abundance.