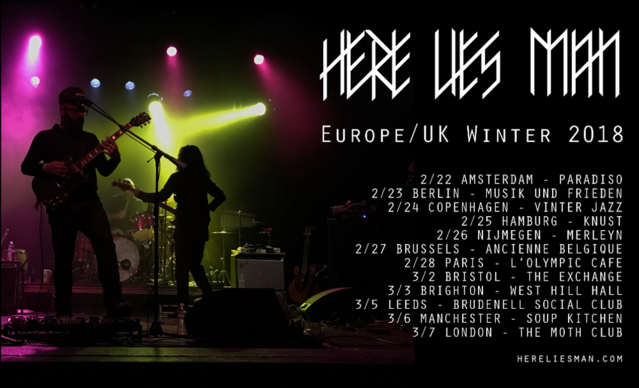 What if Black Sabbath played Afrobeat? In short, that’s the underlying vibe to the self-titled debut by Here Lies Man.

The L.A. based quintet is founded and conceptualized by Marcos Garcia of Antibalas, bringing his erudite experience of World rhythms and music to the more riff-based foundations of heavy rock. The results are an incredibly catchy and refreshing twist on classic forms, without sounding forced and trite like some sort of mash-up attempt. Here Lies Man merges and expands musical traditions organically, utilizing the talents of drummer Geoff Mann (son of jazz musician Herbie Mann and a former Antibalas member) and a host of skilled musicians to make Garcia’s vision a reality.  Now that vision will be hitting the road in Europe and the UK for the first time since the group’s inception.  “We’re excited to be performing a psychedelic requiem for the living this winter” the band explains.  “The idea that underlies the show is that we’re playing the soundtrack to a movie in which the protagonist is undergoing a fundamental transformation of the psyche in fits of rage and ecstasy“.

“Your attendance is requested for the catharsis that ensues. You’re encouraged to sing along and let it all out“.