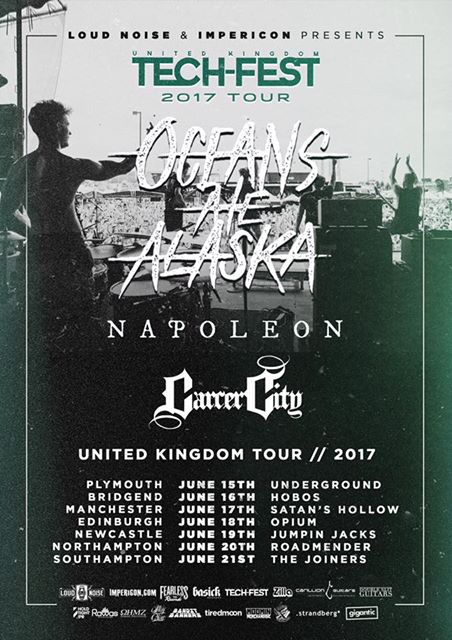 TECH-FEST has completed the line-up for its 2017 tour with the addition of technical metalcore quintet CARCER CITY, who will be joining progressive metalcore headliners OCEANS ATE ALASKA and rising melodic hardcore outfit NAPOLEON.

The tour news follows OCEANS ATE ALASKA’s recent announcement of their new vocalist Jake Noakes, a close friend of the band who stepped up as full-time vocalist for their recent US ‘New Reign’ Tour with Born Of Osiris, Volumes, Within The Ruins and Fire From The Gods. May will see the band appear at Slam Dunk Festival and a special one-off Fearless Records show alongside I Prevail and Ice Nine Kills at the Camden Underworld, as well as perform at Tech-Fest itself in July. The five-piece have also been working on the follow up to their 2015 debut album Lost Isles, more details to be revealed soon.

NAPOLEON released their critically acclaimed debut album Newborn Mind in 2016 via Basick Records, which saw them tour relentlessly throughout the UK and Europe, as well as China and Japan. Since their inception in 2011, the band have become highly revered on the hardcore scene for seamlessly combining abrasive punk attitude with technical virtuosity and inventive hook laden songwriting. Currently working on their follow-up record, NAPOLEON have recently completed a short European run, including Complexity Fest, with an appearance at Impericon Fest on the cards before they return to the road for the TECH-FEST tour.

An exciting blend of 21st century metal that is uniquely their own, CARCER CITY fall somewhere between Linkin Park, Meshuggah, Bring Me the Horizon, Killswitch Engage, and The Amity Affliction. The quintet released their latest album Infinite/Unknown last year via Stay Sick Recordings, having self-released their previous records The Life We Have Chosen and The Road Journals. CARCER CITY’s live resume is one to be admired, currently on tour with Attilaand having previously toured with Silent Screams, While She Sleeps and Continents, as well as sharing stages with TesseracT, SikTh, Dying Fetus and more.