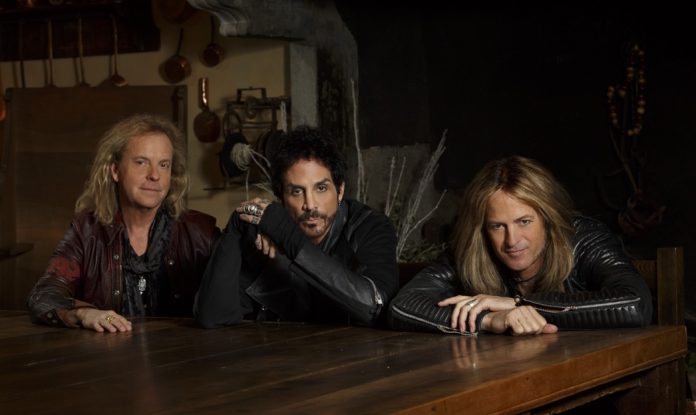 It was directed by Maurizio Del Piccolo of Moviedel, and it was shot at Villa Bossi in Bodio Lomnago, Varese, Italy.

“I Wouldn’t Change A Thing” was originally written by Richard Page from Mr. Mister,” says Castronovo, “and Serafino wanted us to do it our way. The first time I heard it, I got a bit choked up. It’s a beautiful ballad that Doug got a hold of and put his stamp on it.”

“The song was filmed at magnificent historic home outside of Milano, Italy,” Aldrich continues. “It was a rainy day and really had a great vibe for the video. We spent most of the day going for the basic shots and the actors did the love scenes later. There was some steamy stuff going on in the script and I decided it was a bit too racy for me, so I decided to help the chef with his pesto sauce! It is a beautiful song and a nice video. I was very happy about how the solo guitar worked and Deen just shines!!”

LIGHT IN THE DARK is due out October 13 on Frontiers Music Srl, and will be available on CD, CD/DVD Deluxe Edition (includes live bonus tracks on the CD and on the DVD, footage from the band’s first-ever live performance captured at Frontiers Rock Festival in Milan this past April, a “Making Of” mini-documentary, and music videos for “Light In The Dark” and “I Wouldn’t Change A Thing”), Vinyl, and as a special Limited Edition Box Set (includes the Deluxe Edition CD/DVD, 180g Vinyl, T-shirt (size L), poster, lithograph and sticker). Pre-orders for all formats can be made at the following locations:

You can also listen to Revolution Saints’ newest music on Spotify here: http://radi.al/LightInTheDarkSpotify

LIGHT IN THE DARK builds off the classic melodic rock style of the debut, but fans should prepare for a somehow even more inspired set and a few (pleasant) surprises. Inspiring, uplifting, emotionally powerful, and thoughtful, this album WILL be the soundtrack to many a moment in your life.