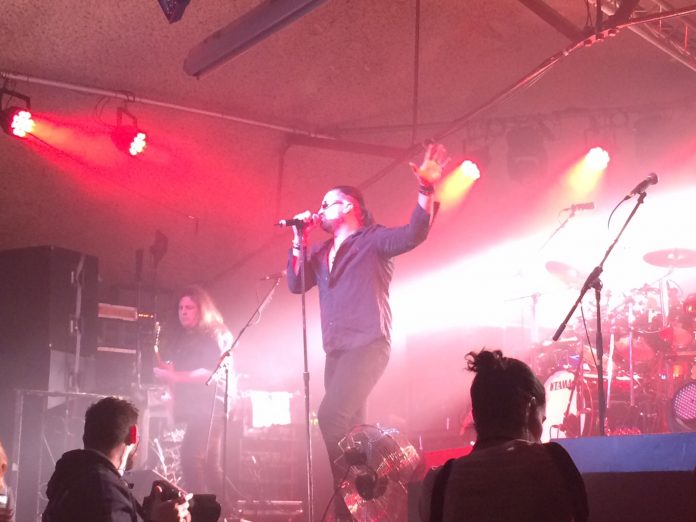 Not so much Melted Space as cramped for room in the Robin 2 tonight as French seven piece (tonight anyway – they are a band with a revolving door policy towards guests) Melted Space kick off proceedings. Opera Metal is what they bill themselves as, and most definitely intricate and pretty complex songs are the order of the day. Three of the number are vocalists, one growler, one male clean and one, the striking Clémentine Delauney, also of Visions Of Atlantis, supplying the aforementioned “opera” section. It certainly adds a twist to their sound, which is heavy yet symphonic. At their best perhaps when more straight up metal there’s a class here to suggest this tour – which starts tonight – could be a big break for them.

Things were already running 45 minutes late before Myrath were due. That delay had stretched to over an hour by the time the Tunisian’s were ready to play their first ever show on these shores, happily they are worth the wait. Prog Metal the way it should be – and that means wonderful vocals Zaher Zorgatti. With Dream Theater an obvious starting point in songs like “Get Your Freedom Back” there is the feeling that any point in the evening Myrath could let themselves go and deliver a 20 minute epic just for the fun of it. They don’t and although very obviously fine musicians, the song is king here. Current single “Believer” is a fine taster for the “Legacy” album – out today – and older material like “Wide Shut” with its eastern tinged crunch is a real highlight, while the closing grooves of “Merciless Times” sum up a fine set in a nutshell.

“We like to put our hearts and souls into the music we present to you” so says Symphony X’s man mountain for a singer Russell Allen. What he means is, five years is a long time. But that’s – give or take six weeks – how long it’s been since prog metal royalty Symphony X were on this stage, in support of the astonishingly good “Iconoclast” album (album of the year on one of MV’s forerunners). Last Autumn they got round at long last to releasing its follow-up. The concept album “Underworld” and that verges on the brilliant too.

Clearly the band agree, given that they merrily set off playing more or less all of it in one glorious chunk. “Nevermore”, the title track, while “Without You”, a wonderfully soaring thing, the absolute highlight of the record is just that here too.

Able to bring the songs to life, there has always been the hint of the showman about Allen, and he gleefully sports a couple of masks during “To Hell And Back”, but each of the band is given the chance to shine, with Michael Romeo soloing impressively during “Run With The Devil”.

After leaving “Underworld’s” closing song “Legend” out – we were to see why – there’s a couple of older numbers. “Out Of The Ashes” is superb but eclipsed by “Sea Of Lies” which roars to a finish. Like the old pros they are the quintet return for an encore of “Set The World On Fire” and “Legend” – dedicated here to heavy metal itself – ends it all.

A fine, fine set is stopped from being a gig of the year contender by the sound problems which dogged all the bands, but also the resulting delays mean the night ends at just before midnight (some 75 minutes after it was slated to). That has the knock on affect of meaning a decent number have to leave before the end to get buses and trains, so the atmosphere isn’t what you might have expected at times.

Still, none of this is the bands fault, and if it means that they come back before five years next time, then, every cloud and all that….