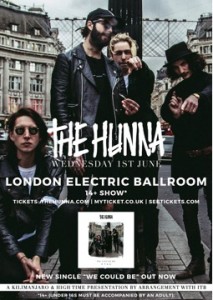 London 4-piece The Hunna continue their rapid ascent, taking over the UK indie-rock scene with a crusading zeal and a fan base growing exponentially by the day.

Having already sold out THREE London headline shows in March off the back of their debut track ‘Bonfire’ they have just announced a headline show at London’s iconic Electric Ballroom in Camden, following the release of their second single on New Year’s Day.

That new single – ‘We Could Be’ – has already notched up over 1.5 million video views in less than a fortnight and is sitting pretty at number 15 on Spotify’s UK Viral Top 50 and number 22 on the iTunes Alternative Chart. The track is also blowing up globally, charting in territories including North America, mainland Europe, Australia and Asia.

In fact, The Hunna’s rise has been nothing short of spectacular. Since launching in October, the Hertfordshire four-piece have amassed an army of followers and seen the videos for both ‘Bonfire’ and its B-side ‘She’s So Casual’ reach over a million views each.

And now with the big and bold statement of headlining the Electric Ballroom on just their second track it looks like The Hunna will have outgrown their ‘ones to watch’ status in just a few months, and are destined to explode across the musical landscape of 2016.

LISTEN TO ‘WE COULD BE’ HERE

Tickets for the Electric Ballroom show can be bought at the below outlets from
10.00am, Friday January 22nd
THEHUNNA.COM | MYTICKETS | SEETICKETS