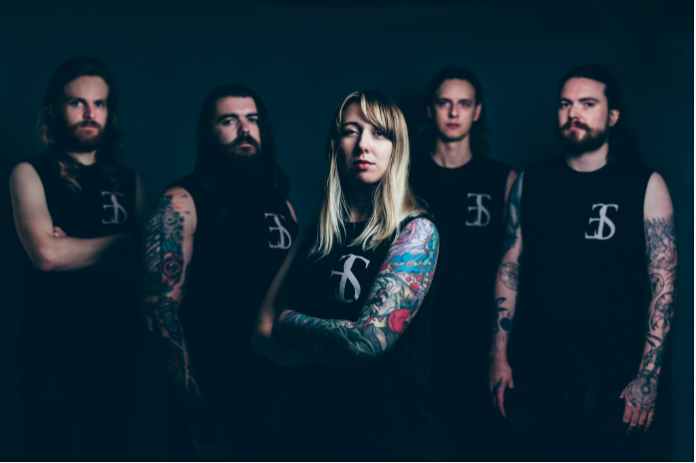 Employed To Serve are set to reveala music video for ‘Sun Up To Sun Down‘- taken from their current studio album, Conquering – todayat 20:00 UK time. Watch it HERE.

Sammy Urwin, Employed To Serve lead guitarist explains: “This video was shot on the first leg of our tour with Gojira and Alien Weaponry this summer. We knew that we were going to film some footage on the tour for a music video, but what song we’d use it for wasn’t decided. After the first couple of shows we could sense that the crowds were really connecting with ‘Sun Up To Sun Down’. We decided that we would try and capture as best we could the energy shared between us and the audience, and thanks to the help of our talented friend and videographer Taylor Baron, I think we’ve done just that.

The song itself is about addiction and depression,” adds frontwoman, Justine Jones. “The repetition within the song is meant to symbolise the feeling of being in the throes of despair, begging for the day to end and to have some reprieve from intense craving and anxiety, only for it to start over again with no end in sight.”

Handpicked by Gojira themselves, Employed To Serve head back out on the road as part of the ‘Fortitude Tour‘ this coming February. Beginning in Dublin on Feb 11th 2023, the tour sees them play alongside Gojira and Alien Weaponry at the 10,400 capacity Alexandra Palace, London, before heading over to France to play even bigger rooms.

Meanwhile, Employed To Serve have been announced to appear at Jera On Air festival, Full Force and Copenhell next summer.

ETS‘s current studio album, Conquering, was released via Spinefarm on September 17th 2021 to mass critical acclaim; landing #4 in Metal Hammer‘s albums of the year list and #6 in Kerrang! Conquering is a fully realised metamorphosis into the band they’ve always wanted to be.

Four albums in, and a steady stream of accolades in tow, Employed To Serve‘s meteoric rise from genre hopefuls to becoming one of UK metal’s most consistently captivating bastions is indisputable.

A deluxe version of Conquering is currently in the works for release in early 2023. Further details will be revealed in due course.