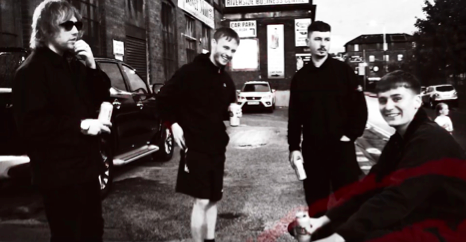 It’s a massive moment for Manchester’s hotly tipped ROLLA. They’ve just released a new video for their current single ‘Ease My Mind’ which is brimming with undeniable rock ‘n’ roll force-of-personality. And if that inspires you to check them out further, you can catch them on Friday when they play a second huge show as guests to Kasabian at Birmingham’s Utilita Arena  – handpicked by none other than mainman Sergio Pizzorno.

‘Ease My Mind’ inspired glowing comparisons with the likes of Black Rebel Motorcycle Club and The Verve, and further boosted their profile when it was playlisted at XS Manchester. The ‘Ease My Mind’ video introduces the band behind the music, the musicians each facing the camera in hallucinatory rapidfire edits which are interspersed with laidback, behind-the-scenes footage. The video was filmed by James Gwynne and produced / edited by ROLLA vocalist James Gilmore.

ROLLA commented, “For the ‘Ease My Mind’ video we wanted to create something that showed a more personal side to us as a band, with footage of us at our rehearsal space in Manchester. it gives a slight inside view of what we get up to off stage.

The concept for the mugshot-like footage was inspired by old police mugshots of famous rock ‘n’ roll stars like Hendrix, Jagger and Bowie. It’s our little homage to those legends. Mixed together with some ROLLA energy and passion, it has made for a cool as fuck music video.”

ROLLA added, “”Manchester Arena was unreal, it felt like we were meant to be there from the first moment we arrived, we didn’t feel out of place once. Walking out on that stage is something we could live over again and again and we ain’t stopping until we can. We can’t thank Sergio and the Kasabian lads enough for inviting us to play! Roll on Birmingham!”

ROLLA are no strangers to the big stage, having conquered summer festivals such as Isle of Wight, Y Not?, Rewired, Neighbourhood and The Great Escape, as well as opening for Happy Mondays legend Shaun Ryder at his first solo show in over a decade. Their next big step comes with the recent confirmation that they will play their biggest headline show to date at Manchester’s Gorilla on April 14th. Any remaining tickets are available HERE.

ROLLA draw on influences spanning the rich history and iconic current bands of the indie rock scene, and put their own spin on the genre by exploring the topics that are vital to their generation. They debuted with the early self-released tracks ‘Thinking of Tomorrow’ and ‘Sweet Lullaby’ before dropping the double A-side ‘No Violence // Show Me’ and now ‘Ease My Mind’, which was produced by Nick Brine (Oasis, Stone Roses) at recorded at the storied Rockfield Studios. ROLLA were formed by the Gilmore brothers, James (vocals) andLuke (bass), who added Tom Paddon (guitar) and Luke McConnell (guitar) before their most recent recruit Saul Bardsley (drums) completed the line-up.