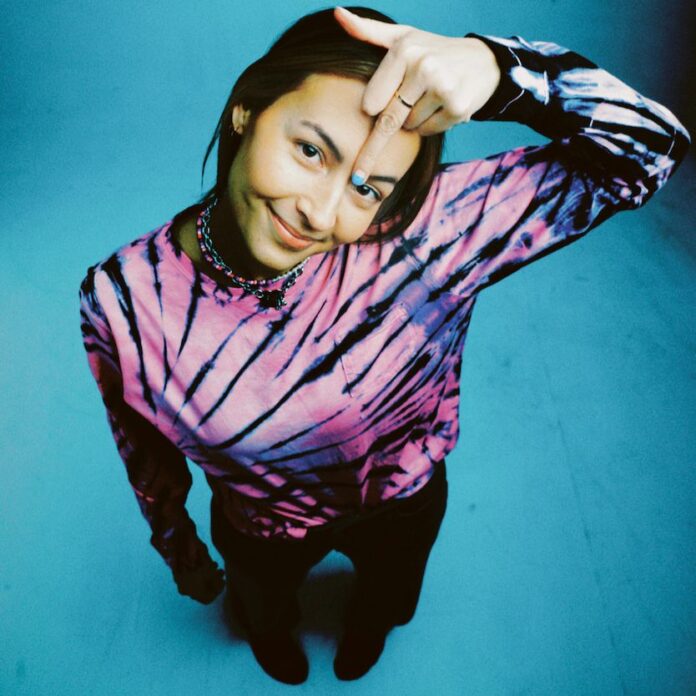 Commenting on the track, Brunæs says: “‘Sleepover Song’ was the song I needed to write to break through months of anxiety and, ironically, insomnia. In my early twenties, I had developed a fear of sleeping alone, a fear of dogs, a fear of being afraid of everything.”

“Yearning for simpler times where my thoughts weren’t going a thousand miles an hour, I started writing about good memories like sleepovers with childhood friends, where my only thoughts were about whoever I ‘like-liked’ at the time and my only fear was my mom coming to pick me up the day after a night of teenage mischief.”

As the track quickly spirals into the realities of growing older—losing loved ones, growing apart from your friends, things you don’t see coming when you imagine what your future will be like—’Sleepover Song’ is ultimately about realising that healing isn’t linear, and reminding yourself of the good memories in the hope that they’ll outweigh the bad.

Born in Norway, a young Lille Venn and her family moved to Singapore when she was just 2 years old. Confused and overwhelmed by the starkly different cultural climate, it was an experience that would see her stop talking for an entire year. Eventually, she learned to love her new home, before the family upped-sticks all over again and moved to Sydney, Australia.

It was there, aged 9, that an early encounter with Canadian pop-rock icon Avril Lavigne set Brunæs on the path to becoming a songwriter. “My brother CK bought me tickets to see her for my 9th birthday,” she reminisces, “and I remember thinking so clearly that she waved right at me. I think I might have had an early God Complex, but whatever happened it sparked a fire in me: ‘I want to be her!'”

Lille Venn began writing music at 13 in her bedroom after school, “desperate to play guitar and be half as cool as my brother,” she laughs. She makes no secret of the fact that a large part of her musical influences come from her older brother, and spent her early teens both wearing his clothes and steeping herself in music from his favourite bands like Blink 182, The Cure, and The Shins.

Several years later and it’s safe to say that her dream of pop-stardom looks increasingly likely to become a reality, with Lille Venn peddling an infectious, radio-friendly brand of arena-ready pop punk/rock that blurs the lines between the music of Blink 182 and Say Anything, and her love of mainstream pop artists like Taylor Swift, Hilary Duff, and The 1975.

Most recently living in London and New York, where she studied at college, Brunæs’ music is infused with the trauma and sadness that she endured over those years of wandering—growing apart from friends, and growing up in the process.

“I think those years of moving influenced my songwriting a lot,” she muses on the cathartic nature of her own songwriting process. “I didn’t realise how much sense of a lack of belonging was prevalent in my lyrics until I wrote them all out and read them back to myself.”

Latest single ‘Sleepover Song’ is the first taste of a batch of new material to be announced over the coming months, and follows on from 2022 standalone singles ‘Not D3@d’ and ‘I Blew My Friends Off!’, which gained support from Norwegian national radio stadio P3.

The new track also comes with a very special visualiser created by Lille Venn and her family, who enjoy a multi-generational creative working relationship. Coming from a homegrown clan of talented professional creatives, all of the visual output associated with her music is created by the family, something that’s close to the songwriter’s heart.

“We’re so close because we all went through these big experiences and moves together, but no matter where we are we always have each other,” says Brunæs of her family ties. “We were all, in our own way, the new kids. People didn’t want to get attached to us because we were never staying for too long. I feel so lucky to have a family who is so supportive, it was just second nature to work with them—we’re all creative in our own right, but we can come together and support each other’s work and visions on our projects in a very collaborative way.”

Lille Venn will be playing select Norwegian live dates over the coming months, with plans for UK appearances in the near future.