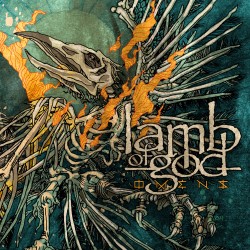 Everyone reading this, if they’re honest, has got that band that when they listen to them, they think: “Bloody hell! These are so good! Why don’t I listen to them more!?” Then they probably don’t listen to them for two years until another new album comes out and it happens again. Be honest, you have.

Here’s mine: Lamb Of God.

Like I genuinely love Lamb Of God. I have done since someone pressed a CDR into my hands in about 2007 and said, “I think you’ll like this”. That record was “Sacrament” and I did.

I’ve been to see them play many times, I’ve got all the records since, and “Omens” is just another in a long line of brilliance from them over the years, but still, I still haven’t over those years given them enough time.

So I decided to do something different with “Omens”. I went old school. I have lived with this for almost a month, I must have listened to it 10 times (in honesty, usually writing a review it’s done in two, maybe three goes) and here’s the problem: it’s a phenomenal record, but its one that has delivered something different every time, and moreover, it’s a mighty hard one to decipher. But there comes a time when you’ve got to shit or get off the pot, so what follows are today’s thoughts. If I wrote this tomorrow, it’d very likely be different.

Because, I’d contend, that in a world of homogenisation, LoG are different. They stand apart. Take “Nevermore” – the opening song. It’s brutal. Seriously heavy, and when it kicks in when they play next month, it’s a good job I’m in the seats, because it’s going to be a hell of a mosh. Yet, it’s intensely catchy too. D. Randall Blythe screams “hanging by a thread! I Hope you choke on it!” and you are there, joining in. That’s what they do.

Part of this, of course is down to Mark Morton and Willy Adler being as good a guitar pair as there is, but its more. They have got a chemistry, and like Maiden, say, they’ve got a signature sound. “Vanishing” is it. There’s not a doubt its one of theirs, but equally no one else gets near it.

“To The Grave” is a thrasher, straight ahead and proud. But it’s a thrasher with a set of bollocks that swing. This is not fast, like Slayer, but my god! It hits like a steamroller. “I don’t give a god damn,” thunders Blythe at the start of “Ditch”. He means it. Art Cruz, the drummer since 2019, beats his kit like it owes him money, but there’s a tremendous understanding of what’s needed here. The title track is probably the best thing here, with its “fuck it all, ignore the omens” hook, but it channels an anger. The anger that burns in anyone with a brain in 2022 that we’re all being taken for fools.

There’s an eerie feel to “Gomorrah”, like you know its going to burst out, but don’t know when. “III Designs” barely conceals its rage, but working with Josh Wilbur – he’s worked with them for years – has helped this be a laser guided attack, “there’s a war going on inside of me” goes the first line of “Grayscale”. It wins with a blunt instrument, while there’s an almost hardcore flavour to “Denial Mechanism”, which is balanced out with the slow builder, “September Song”. The opening gives pause for reflection, before it bludgeons one last time.

Many years back, Metal Hammer magazine put a CD on the over with “New Wave Of American Heavy Metal” The “movement” that Lamb Of God are meant to belong to. Such epithets never made much sense to me, never will. I’ve never quite understood the need to pigeonhole everything.

What I can say with a certainty, though, is that “Omens” is a shining example of a modern sounding heavy metal album, even if its by a band that’s been going for well over 20 years, and one I’ll try and remember to listen to more.