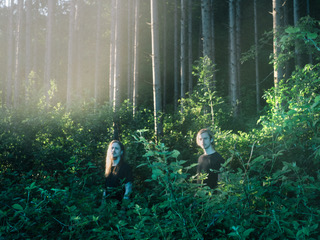 Now to coincide with World Piano Day the band have shared a brand new single which doesn’t feature on the album called, ‘Flooding’. The band comments,

“Flooding is about that overwhelming feeling when too much information is bombarding you from all around. It all builds up, leaving no space for thoughts of your own, until it eventually overflows. Accepting you can’t control the chaos, you slowly drown. The ending being played on felt piano suggests you’re already under the water. We collaborated with violinist Ana Novak once again. Nothing but the rough idea of the song existed before our session, everything else happened there in one day.”

Formed in 2017 by Peter Dimnik and Žan Šebrek, Shadow Universe merge contrasting textures of shimmering ambient soundscapes and heavy anxious darkness to portray the diversity of nature and life on earth and beyond.

About Subtle Realms, Subtle Worlds:
Every person experiences the world differently, which puts us into our own unique bubbles, subtle worlds. Subtle Realms, Subtle Worlds finds the band turning their songs into living, breathing ecosystems, carefully dissecting every moment of peace and chaos alike. The album sees the building particles of the universe as separate worlds, with their own story, perception, rules and individual inner realm.
Produced, recorded, mixed and mastered by Peter Dimnik

The album is available to order on CD and digital formats and as a limited edition vinyl LP (480 copies on black, cream/black Galaxy effect and cream with blue splatter vinyl), from the Monotreme Records web shop: https://bit.ly/3zGnQr0 or from Bandcamp: https://bit.ly/3JSQgD3