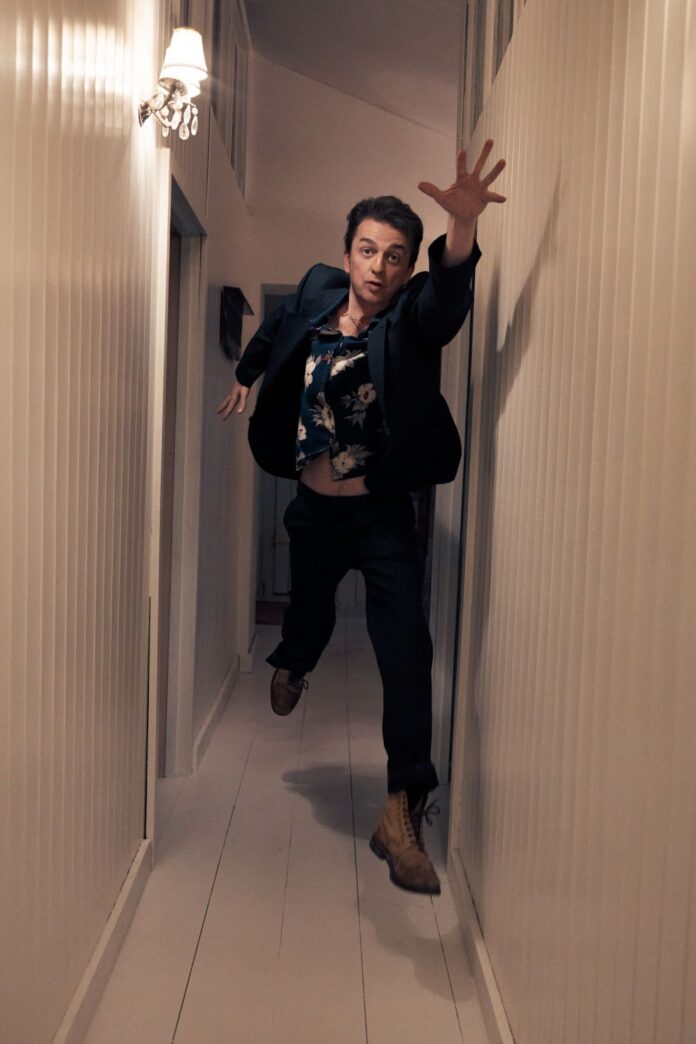 Danny Goffey, co-songwriter and founding member of British band Supergrass, has announced the release of his long awaited third solo album Bryan Moone’s DiscoPunk. Available on 21st October 2022 via Distiller, the album will be accompanied by a self penned, limited edition book about a day in the life of his fictional alter ego… Bryan Moone. The first track from the album, ‘Everybody’s on Drugs’ is released today. Listen here

‘Everybody’s on Drugs’ rumbles from start to finish with chomping guitars, throbbing bass and a punk beat that carries throughout the verses. It’s drenched in elongated vocals and spoken words that tell a story — almost in an urgent manner — that anyone and everyone in our daily society and surroundings, is on drugs.

Goffey said “This song isn’t all about street drugs. It’s more that these days, just about everybody’s on some kind of drug. Prescribed pharmaceuticals, over the counter pills, alcohol, gummies, vapes and vaccines… you name it, and all ages. So it can be hypocritical and judgemental to point a boney finger at the ‘illegal’ participants. We started the song with Liam (drums) playing some fast punky beats, then I added some choppy guitars and throbbing bass. I’m not quite sure what style I was going for on the vocals, sometimes it’s just whatever comes out. This time, a deranged newsreader emerged.”

Bryan Moone’s DiscoPunk was recorded after the first lockdown in the late summer of 2020, Goffey once again teamed up with producer and long-time collaborator Simon Byrt. With a fresh and eclectic sound, Bryan Moone’s DiscoPunk is a feisty album built around anecdotal lyrics ranging from humour to heartbreak with some cultural observations thrown in for good measure. With influences from Squeeze, Queens of the Stone Age and Ian Dury, the album also features collaborations from Ed Harcourt, Gaz Coombes and Louis Eliot.

Danny said “Being made to stay at home indoors for three or four months was hard for everyone, so when we eventually managed to get into the studio to ‘work’, the shackles came off and we got hip deep into making the tunes come alive, and before too long, we pretty much had most of the album recorded.”

“There are a few songs on there that I guess were influenced by being locked up… ‘All Dressed Up (With Nowhere to Go)’ is about you and your partner gradually slipping into a trippy world of madness in the house. Psychedelically connecting, crossdressing, playing the French horn and bongos, zooming around on high flying disks and eventually not really recognising yourself in the mirror… erm, etc etc. All the normal stuff.”

A limited number of Bryan Moone’s DiscoPunk LPs will be available in an exclusive (only 1,000 available) ‘Disco Bag’. Accompanied by a special format fictional book written by Danny, that documents a minute by minute, day in the life of his alter ego character, Bryan Moone. The book details the inner thoughts and musings of a musician living with his erratic kids and his headstrong but beloved wife Em – Bryan’s day is a constant battle to try to write new music, but he keeps getting distracted by the hectic life around him, including a phone call from his daughter’s school after she commits an ‘extreme violation’, the real threat of being assaulted with a walking stick by an eighty year man in the pub, a severe bout of anxiety in the Co-op when trying to choose the right type of milk and it ends with a coffee related tragedy. Each chapter in the book has been brought to life and beautifully illustrated by Danny’s son Frank. Three 10″ X 8″ prints of Frank’s drawings will also be included in each Disco Bag. Preorder here

5. I Lost My Girl To A Fairground Worker

7. Looking After Number One

8. Back Into The Water