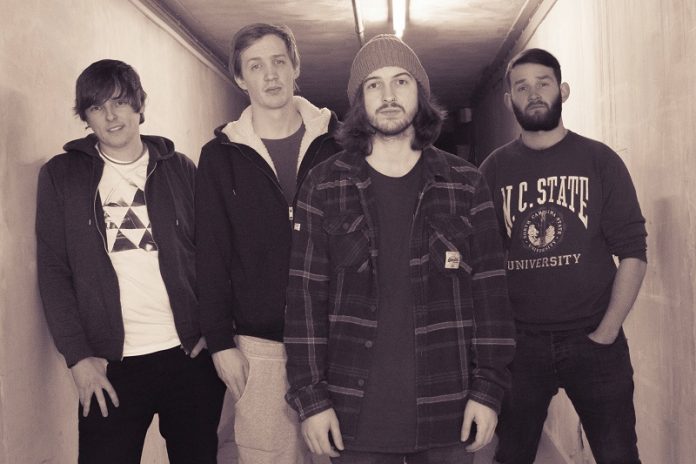 As Mancunian alt-rockers Landmarks gear up to release their third EP ‘In Spite Of It All’, via Scylla Records on 12th August, they are pleased to reveal their latest video for single ‘Cutting Strings’. Adam Long, bassist and co-valist of the quartet said of the track: “It features the lyrics that we are most proud of in any song we’ve written up to this point.” Revealing it’s genesis is in a line from ‘Avengers: Age Of Ultron’, which inspired the chorus hook, Long continues: “From there we started to develop the story of a relationship on the rocks, with one half of the couple in question falling out of love with their partner. Too many couples expect so much from one another without stepping back and appreciating the little things and the time we get to spend with those close to us.”

Speaking of the recording process for the band’s forthcoming E.P, Long sets the scene: “Everything was coming together swimmingly. We had tracked drums, bass, guitars and vocals, and I had put a whole day into getting the harmonies just perfect…” Can you feel that ominous ‘But’ on the horizon? Indeed, just as the band – completed by vocalist / guitarist Brad, guitarist Nic and drummer Tom – were wrapping up their time in the studio, disaster struck, as Adam reveals: “But, then the studio was broken into during the night. Twice. Much of the equipment was stolen, and the studio was brought to its knees.”

It was this twisted turn of events that, in part, inspired the E.P’s title, a middle finger to fate’s cruel hand; “That traumatic event solidified the phrase in our minds,” says Adam, “It’s subsequently come to work almost as a band motto for us. Thanks to an unexpected twist-of-fate, our producer Matt Heap was able to recover most of this equipment, and he managed to save this EP, and the whole thing reminded us to just keep giving everything we have, and to take each obstacle as it comes. I’m glad that we went through it in a way.” ‘In Spite Of It All’ sees Landmarks making a departure from their pop punk roots toward an alt-rock laced sound. Though still rich in melody, it’s an altogether more sombre affair, recalling the likes of Brand New in its downturned, more introspective aesthetic.