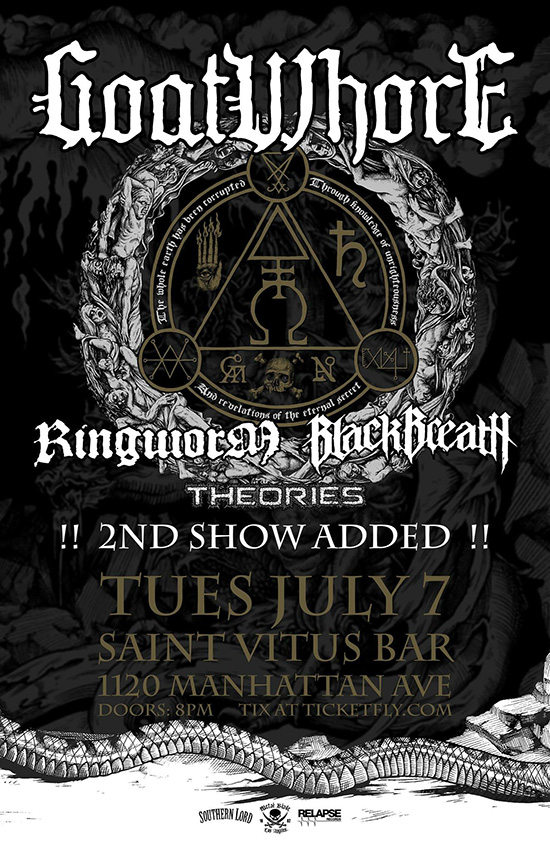 Louisiana road warriors, GOATWHORE, are currently crumbling stages across the country on a North American headlining tour that commenced earlier this month. With support from Ringworm, Black Breath and labelmates, Theories, the epic journey will consume over three-dozen venues upon its conclusion on July 12th. Additionally, the band will take part in this year’s Gwar B-Q in Richmond, Virginia this August as well as Knot Fest in San Bernardino, California this October.

Reaping critical hails for their consistently punishing live performance, Metal Assault gushed of their recent Los Angeles show, “GOATWHORE commanded the whole room from the second they took the stage, and attending a show on the remainder of this tour should be a no-brainer for any and every metalhead in North America.” Of the same evening, New Noise Magazine enthused, “GOATWHORE unleashed their high octane brand of ‘Apocalyptic Havoc’ and all was right with the world… ‘Cold Earth Consumed In Dying Flesh’ sounded heavier than imaginable in a live setting, and the delightfully titled ‘FBS’ [Fucked by Satan…naturally] caused a whirlwind down in the pit.” Relayed The Examiner of their Oakland show, “When the buffer music finally ended and the lights changed to blood red, it was clear who was due up. GOATWHORE exploded on stage with the furious ‘Poisonous Existence In Reawakening’ followed by ‘Alchemy Of The Black Sun Cult.’ With pulverizing drums and crunchy guitars, ringing throughout the Opera House, Ben Falgoust worked the crowd over with his guttural growls… Ending the night with the masterful ‘Apocalyptic Havoc,’ GOATWHORE exemplified why they are on top of the DeathThrash game.”

As a treat to New York GOATWHORE celebrants, the band today announces a special second performance at Saint Vitus Bar in Brooklyn, New on July 7th. The recent addition follows GOATWHORE‘s now sold-out show at the same venue the evening prior.

So if you missed out on tickets the first time, or just in the mood for an apocalyptic double-header, head over to THIS LOCATION and secure your tickets now before it sells out.

In related GOATWHORE missives, the band will be compiling fan-filmed live footage for a new video for the crowd-favorite track, “FBS.” If you’re attending a show on this tour (or have footage from a previous run) and capture any video on your mobile device, post it to YouTube and send the link to goatwhorevideo@gmail.com. Your clips could be featured in the brand new video and your YouTube channel credited in the final video description.