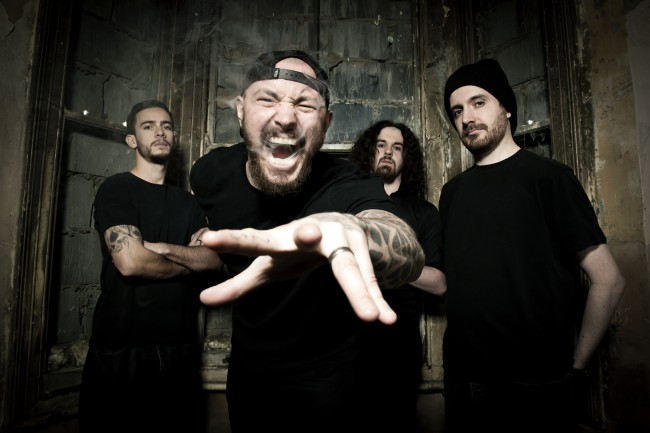 And you can stream it right now – right here!

Met with a barrage of praise with Metal Hammer claiming they are “destined for big things”, Classic Rock pronounced them an “explosion of vitriolic blood, guts and brutal cries”, Terrorizer called them “Immense”, Q said they “keep the brutally groovy spirit of Pantera alive” whilst the Guardian heralded they create some of the “most infectious riffs of the 21st century.” Further praise came from Alex Baker of Kerrang Radio who said “My head nearly exploded with how good this band are” and Sophie K made it them her record of the week exclaiming “these guys are ones to watch”. Further radio play came from Daniel P Carter at BBC Radio 1, Ian Camfield at Xfm and Johnny Doom at Kerrang Radio.

‘Raynardine’ is a hammer to the head of a song which occupies the line between mythology, trust and apprehension. The story of a wolf in sheep’s clothing whereSmith’s vocals spit out “steal all their hearts away” over a tank crushing rhythm section and formidable guitar twists that are relentless and cut though the vocals whilst a war rages.

‘New Age of Old Ways’ was recorded with Russ Russell who has previously worked with Napalm Death, Evile, Dimmu Borgir, Sikth and New Model Army who helped harness the raw live energy and translate it to record.

May 29th – The Underworld, London w/WOVENWAR