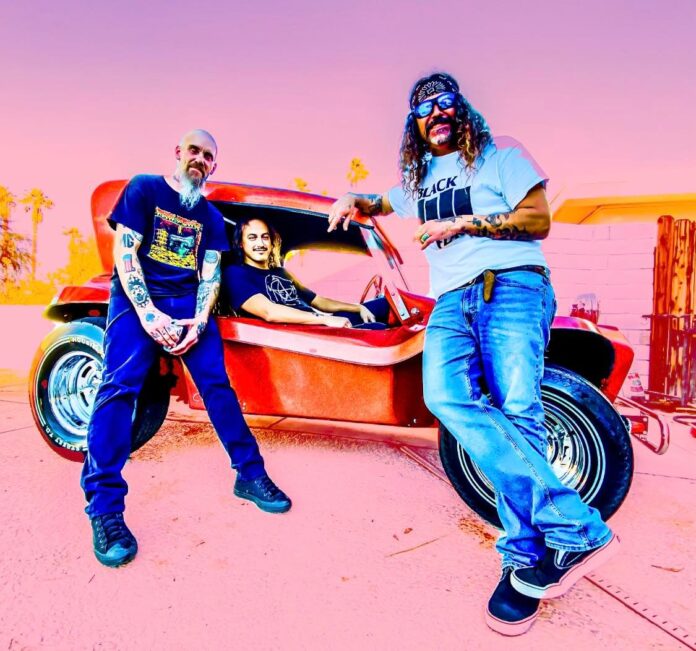 “When the summer months roll into the desert, the heat burns your feet. So we desert folk take a ride up the mountainside to Strawberry Creek. You’re sure to cool off but you’ll still have dirty feet. And that’s totally ok.” – Brant Björk
🌵 Listen to new single “Strawberry Creek (Dirty Feet)” 🌵

The desert kings are back with their sophomore album ‘totally…’, a perfect mix of desert swing, stoner rock and low desert punk all at once! Eight new tracks that will blow your mind, recorded by Brant Bjork’s long-time collaborator Yosef Sanborn. Mellow guitars, funky stoner rhythms, bluesy atmospheres, Nick Oliveri’s trademark punk drive: the album flies away in one listen and makes you want to play it again immediately. As the artwork will tell, the trio doesn’t take itself too seriously. After all, isn’t STÖNER all about fun and friends jamming together? That’s precisely the recipe they are delivering after 30 years of rocking the heavy world.

STÖNER is the supergroup formed by desert rock godfathers and long-time friends Brant Bjork (founding member of Kyuss, also former Fu Manchu), Nick Oliveri (Mondo Generator, former Kyuss and Queens of the Stone Age) and Ryan Güt (Brant Björk drummer). Their debut studio album ‘Stoners Rule’ was released in the summer of 2021, and they now return with their brand new album ‘totally…’ on May 6th! It was produced, recorded and mixed by Yosef Sanborn and Stöner, with appearances by Greg Hetson (Circle Jerks) and Mario Lalli (Yawning Man) on guitar. Listen to previous singles “A Million Beers” and “Party March“.
New album ‘totally…’
Out May 6th on Heavy Psych Sounds