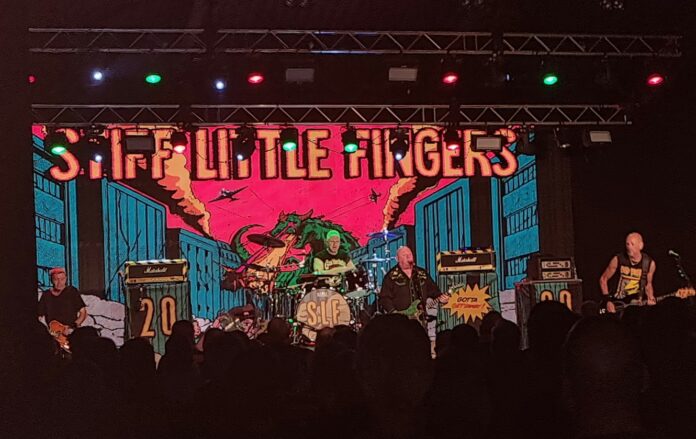 Right before he plays “Gary Gilmore’s Eyes” TV Smith says this: “I recorded this on Top Of The Pops with The Adverts and two days later we went to Belfast where a young punk band called Stiff Little Fingers opened. They blew us off stage.” Whether that’s true or not I can’t say but it speaks to how far they go back. And if these days TV Smith wields his acoustic, the fact he does so like it’s a weapon proves he’s lost none of the fire. He’s lost none of his ability either to write songs that document the world. “Bounce Back” written during the pandemic, is especially prescient, while “Expensive Being Poor” might be about your gas bill. Politicians of all shades appear to be in the sites of Smith. “I’m sure they think we’ll forget how they fucked us over for years” he notes acerbically before “I Delete” and “My String Will Snap” has him on his last nerve. He celebrates being in the charts (“they are the heritage charts, but we’ve shot to 43”) with his new single, “Different World” written with his friend Richard Strange. The last one is a return to the old days and “One Chord Wonders”. And if those wild times are in the past then TV Smith remains an advert for the fact that punk rock is not about the volume you play with, but an attitude.

There were many ways I could have started this review. But in the end, it came down to six blokes who were next to me. Four of them were probably watching gigs when SLF formed 45 years ago. The other two might not have been born. Yet, when “Alternative Ulster” hits, all of them get their arms around each other’s shoulders and jump up and down like maniacs.

That, right there, must be the biggest joy of all to Jake Burns and the lads. Indeed, bassist Ali McMordie says something similar when he addresses the crowd before “Barbed Wire Love”, when he reasons that “this must go back two generations now.”

And it does, but what they are too modest to say is this: there is only one way you can last this long and play to this many people three months after you played 15 miles down the road. You have tremendous songs that connect with people time after time.

There’s another thing too. They don’t play many new songs, but the one they do play (they’ve been playing it for a while) is “Last Protest Song” and before they do it, Jake Burns says: “I love to see the young bands coming up and they’ve got thousands and thousands of people watching them. But it’s like, for Christ’s sake lads, write about something that matters, will you?”

“Writing about something that matters” is all Stiff Little Fingers have done since their debut in 1979. “Suspect Device” is the first song here and came from it, “Fly The Flag” from 1980s effort makes a return and is particularly important in a Jubilee year, that they follow it up with “My Dark Places” – together with the customary plea for men to look after their mental health – is all you need to know about this band.

Highlights come one after the other, as ever. “Bits Of Kids”, a singalong “Nobody’s Hero” and Burns’ favourite “Safe As Houses”, are merely three in a long list, as is “Silver Lining”. “We wrote this in 1981 to express our disgust at the government of the day. They were short changing people’s pensions, the welfare state and trying to kill the NHS….glad to see a lot has changed” sneers Burns. See how the best songs never date?

They tour so often (MV has seen the band more than any other in the last five years)  that the end of the set is almost nailed down. “Strummerville” celebrates punk itself, “State Of Emergency” and “Gotta Getaway” with its throaty roar take us to the encore, and “Tin Soldiers” brings us back to where we came in, and the fact that this band has mattered to so many for so long.

The tour t-shirt they were selling outside says it best: punk rock is dead, but….

The “but” is clear. But it isn’t. not as long as bands with songs about life and with integrity exist. In short: Punk rock needs bands like Stiff Little Fingers.