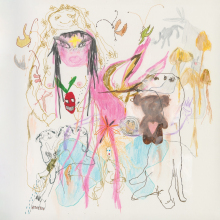 Born in the Philippines and raised in London, Bea Kristi began recording music as Beabadoobee in 2017. Her debut album `Fake It Flowers` was released in 2020 and she releases the follow up `Beatopia` this month.

We are introduced to this new release with `Beatopia Cultsong` which begins with a cacophony of sounds akin to wind chimes before vocals join and become almost chant like as they evolve. A brief but gentle opening. We have an underlying guitar rhythm that floats along on `10:36` a dreamy offering with vocals that include a spoken word segment. The song relates to the singer`s personal relationships with the people in her life and how much she needs their reassurance.

`Sunny Day` has a more electronic drum machine beat trippy vibe withy soft vocals sprinkled atop. A warm chilled out submission. Beabadoobee has shared that with `See You Soon` “I feel like the idea behind it is that it’s meant to make you feel like you’re tripping on shrooms. Or, I feel like the chorus especially, I want it to sound like a breath of fresh air, like, you know, like a realisation of some sort.”  It may feel that way but I found it quite enchanting in a dreamy drifting kind of way.

`Ripples` opens with orchestrated strings and was a written about the artist`s struggles with imposter syndrome due to her rapid rise in popularity, The guitar frets could be heard throughout and to me added a further poignancy to the track. There`s a kind of curve ball with `the Perfect Pair` which is a jazzy composition with a bossa nova beat that will have you up dancing or at the very least shuffling your feet as you listen.

`broken cd` is led by a strummed acoustic guitar with vocals that have a real sense of vulnerability about them and relate a tale of youthful heartbreak. I have to say I really loved `Talk` which had a fuzzy grungy guitar riff  and was delightfully upbeat but seems to refer to an imagined relationship and Tuesday which seems to be the day of the week that all hell breaks loose.

`Lovesong` is a fairly stripped back number with an acoustic guitar and tinkling piano keys, some nice harmonies and strings with lyrics that rejoice in the narrator`s pleasure of their partner in joyful romance.  We have a much more intricately strummed guitar, shimmering cymbals, and drumbeat throughout `Pictures of Us` where the vocals are quietly shared and are almost lost in the mix at times  but maybe that was the idea. A charmingly reflective musing.

fairy song` has a churning beat and some synthesised vocals interspersed throughout this calming piece which does have it`s moments where it almost bursts to life. There a more intense sensibility about `Don’t get the deal` which enjoys the interplay of a male vocal responding to the singers own questioning tone.

`tinkerbell is overrated` is another mellow piece which has singer, songwriter, and record producer PinkPanheress joining on vocals which have a slight openness in the beginning of the track before it blossoms and they become almost defiant but not aggressive. A song that was written during the recent lockdown. The album closes with `You`re here that’s the thing` which is almost a  throwaway number with piano, strummed guitar, soothing vocals, and a tapped rolling drumbeat.

I have to admit I found plenty to enjoy on `Beatopia` which had shades of jazz, some dreamlike sequences, indie grungy offerings, trippy musings, and almost ethereal soundscapes with vocals that switched between helplessness, susceptibility to almost subversion.

Beatopia was a deeply intricate universe which the singer dreamt up to escape reality as a child and I have to say my visit there was most enjoyable, i`m sure yours will be too.