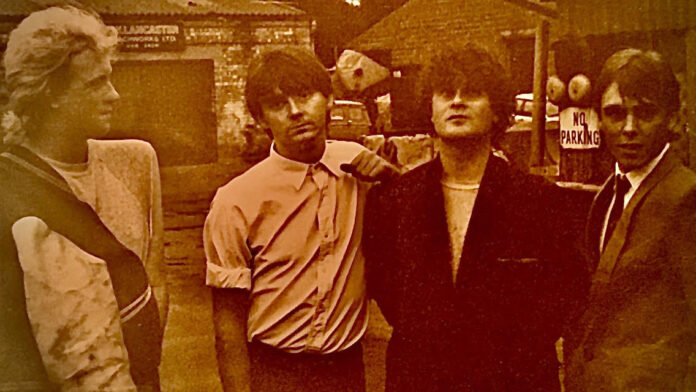 Michael Burdett has spent his life in music. Amongst his best-known compositions are the theme to BBC’s Homes Under The Hammer and Masterchef. In 1979, he was the first person to spot George Michael and Andrew Ridgeley: After watching them rehearse at a church hall, he took them into a studio and produced their first-ever demos.  In the late ‘80s and early ‘90s, Michael wrote music and performed voiceovers for some of the biggest-selling computer games in the UK. These included Speedball 2, Sensible World of Soccer and Mega-Lo-Mania. He also discovered a lost recording of Nick Drake’s Cello Song that had not been heard since the late 1960s; his one-man show based on the story was an Edinburgh Festival hit.

In perhaps the least rock n roll story ever, Michael’s musical journey began in 1977 when he joined the Punk band London as a bass player. The band featured Jon Moss who would go on to join Culture Club. Hearing tales from the band’s experiences on the road triggered stage fright and a panicked Michael got his mum to phone manager Simon Napier-Bell to inform him that he would not be able to perform live as he wasn’t available!  This problem would return to haunt him and eventually be part of a future band’s demise…

The Amber Quills formed in 1982 in west London: four friends who had met at school with Michael now as vocalist and guitarist, Encouraged by the interest of record companies, spent months in rehearsal, honing their material. But when it came to recording, they didn’t complete any final mixes because they ran out of studio time. They also never performed live because Michael’s stage fright surfaced again and within a year the band was no more. The master tapes from their studio sessions remained in Michael’s storage unit for nearly 40 years until a flood in 2020 destroyed most of what was there. Although so much of Michael’s archive had gone, the loss of The Amber Quills tapes bothered him most, as he’d always vowed to finish the songs. Eventually, he found a company that could dry and restore the multi-track tapes and getting them back spurred him into action.

Now, the first track from The Amber Quills to be released is Chords and Candies. This 2022 version was mixed by Simon Hanhart, who also did the BBC’s Perfect Day and has worked with everyone from Brian Wilson and Alfie Boe to Marillion. Richard Cottle added the keyboards, he has played with David Bowie, Eric Clapton, Manic Street Preachers and Seal.  Miriam Grey, the backing vocalist, has sung with many artists including Tom Jones and Paul McCartney.

1000 numbered 12″ vinyl singles of Chords and Candies are for sale on www.theamberquills.com; prices vary by number of the edition. These vinyl versions feature two bonus special mixes [not available digitally]. Additionally, 78 extra copies of the 12″ single are hidden across the UK. Many will be in charity shops. Each is marked “hidden copy”. Also, rare white label copies will be placed in four charity shops across the UK – that’s one in England, one in Scotland, one in Northern Ireland, and one in Wales. This means there will be 82 hidden singles in total to reflect the original year of recording, 1982. People may come across a real bargain. In a charity shop. A free copy hidden in a hollow tree. Or in a phone box full of books. The hunt is on!