Sticking Their Necks Out 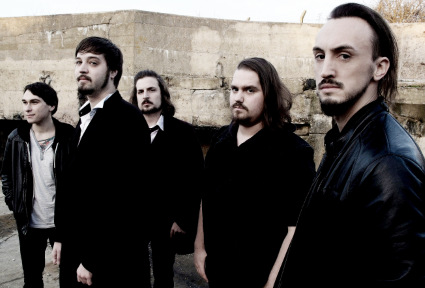 MVM saw them with Tussk, and thought they were ace, now The Droppers Neck are ready with an EP

By drawing from the formidable powers of Cancer Bats, Eighties Matchbox B-Line Disaster and Gallows, The Dropper’s Neck hit you with robust riffery, compelling dynamism and mesmerising dark hooks. The enigmatic quintet are poised to break from the underground with their superb new EP ‘Nineteen | Sixteen’, which is nationally released on Monday 13th July, through all stores.

Hailing from Essex, The Dropper’s Neck were born in 2011 and feature the talents of Lloyd Mathews (Vocals), Chris Blake (Lead Guitar), George Barrows (Rhythm Guitar), Jamie Abela (Drums) and Jack Turner (Bass). The five piece soon cultivated an engaging live set and quickly built a name for themselves on the live circuit through extensively touring and by unleashing a series of highly energetic and frenzied shows.

The band’s growth continued as they released their debut album ‘Second Coming’. The record was recorded by producer Paul Tipler (Placebo & Eighties Matchbox B-Line Disaster) and helped launch them to a national level. The album picked up a glut of national press and radio support, with Rock Sound, Classic Rock Magazine, Powerplay Magazine, Big Cheese Magazine and Kerrang! all firmly backing the band. Last summer, support continued for the sludgy punkers as they released their explosive video single, ’Line Me Up For The Firing Squad’, which was exclusively premiered by Metal Hammer.

The industrious quintet are now back in the saddle and fully loaded with a brand new EP ‘Nineteen | Sixteen’. The record is their best work to date and is brimming with seven slabs of highly toxic dirty punk rock, dashed with hints of physcobilly, and brimming with unabashed energy and sheer force. From the opening haunting noises of ’57,470’ to the final power chords of ‘Stutter’, this EP shifts through the gears at breakneck speed. Major highlights are the brain-severing rhythms of their previous single ‘Line Me Up For The Firing Squad’, the alluring and abrasive beatings of ‘Somme’, and the frenzied garage punk drive of their forthcoming single ‘200 volts’. The Dropper’s Neck will break and you will want to be around when it happens.