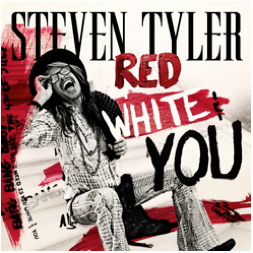 Aerosmith frontman – and globally-renowned rock icon – Steven Tyler has today announced the details of his forthcoming solo single ‘Red, White & You’, which is available at all digital partners and streaming services from today. Tyler is currently working on his highly-anticipated debut solo album with Big Machine Label Group.

‘Red White & You’ is a glorious illustration of how to weave the famous slide guitar and banjo-jangling sounds of country with the huge radio-friendly choruses that have been synonymous of Tyler’s highly prolific musical career to date. Produced by Tyler himself, along with one of country music’s finest session players Dann Huff (Michael Jackson, Taylor Swift, Celine Dion), the track was also co-written with Nathan Barlowe, Levi Hummon and Jon Vella.

Steven Tyler set the music industry abuzz in 2015 when he announced his first solo project would be a venture into country music. A longtime fan of the genre, Tyler hit the airwaves in May 2015 with ‘Love Is Your Name’, of which Rolling Stone magazine said“Once the chorus hits, ‘Love Is Your Name’ builds itself into something towering and anthemic, driven forward by a melody that’s more appropriate for the arena than the honky-tonk.”

‘Love Is Your Name’ reached #1 on the Billboard Country Streaming Songs chart and the accompanying video has garnered over 10 million views to date and can be seen HERE.

After a major television premiere on the finale of American Idol, Tyler traveled coast to coast introducing himself and his new music to country radio stations to a great reception. Both the Country Music Association and the Academy of Country Music invited him to appear on their award shows and he was selected to announce the 2015 CMA nominees on Good Morning America.

Tyler is considered one of music’s most recognisable, dynamic front men and has been cited by Rolling Stone as “one of the greatest singers of all time”.Tyler and Aerosmith have sold more than 150 million records worldwide – he has won 4 Grammy Awards, 6 American Music Awards, 4 Billboard Music Awards, and an Emmy Award. In addition to having 9 number one hits, 25 gold, 18 platinum and 12 multi-platinum album certifications, Tyler, along with the rest of his band members were inducted into the Rock & Roll Hall of Fame in 2001.

In 2013, Tyler was awarded with the Founder’s Award at the ASCAP Pop Awards and was inducted into the Songwriter’s Hall of Fame. In November 2015, Tyler founded his philanthropic initiative Janie’s Fund (www.JaniesFund.org), in partnership with Youth Villages to bring hope and healing to girls who have suffered the trauma of abuse and neglect.