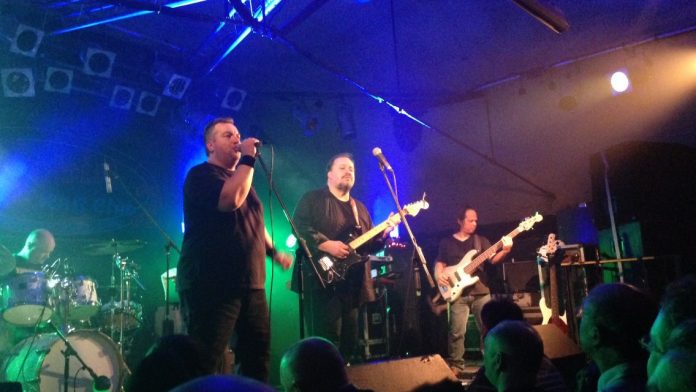 A wet Friday evening in November hardly seems T-Shirt weather but most folk crammed into the Bilston Robin to see Steve Rothery & his fine band must have left their coats in the car or even braved the elements with just a Marillion shirt for protection, such was the amount of band garments – both Fish & Hogarth era – on display.

Steve and the band sauntered onstage bang on 9.30pm to a rapturous welcome and then proceeded to play the latest album ‘The Ghosts Of Pripyat’ from start to finish, with a few words Inbetween each track from Mr Rothery to explain the meanings of each song. The musicianship on display was a music purists idea of heaven, each member a master of their own art. The inclusion of fellow guitar player Dave Foster from the wonderful Mr So & So allowed Steve a chance to bounce off another guitarist, something he cannot do usually being the only six string craftsman in Marillion.

The tracks from ‘The Ghosts Of Pripyat’ album such as “Morpheus”, “Kendris,” “Yesterday’s Hero,” “White Pass” and the title track all sounded even better in the live arena than on record – an amazing achievement in itself, and that was it for the first half…..could this gig get any better?

The band came back after a ten min break with the added inclusion of fine vocalist Martin Jakubski from tribute act ‘StillMarillion’ to wow us even further with a set filled with Marillion classics not often heard these days, what followed during the next 60mins plus was sheer magic.

For a Marillion fan of 32 years such as myself the set of “Cinderella Search,” “Easter,” “Afraid Of Sunlight,” “Sugar Mice,” “Incubus,” “Chelsea Monday,” “Fugazi” and the encore of “Lavender/Bitter Suite/Heart Of Lothian” had myself and the rest of the crowd searching our vocal range to sing every single word with the passion we did all those years ago when we first heard those wonderful songs.

The band finally left the stage at 11.45pm and a lot of happy punters trudged out into the cold wet evening with a smile on their faces and a spring in their step.

Steve Rothery is a wonderful musician, a great guy and a man who just loves playing to an appreciative audience, whether it’s with Marillion or his own band…..long may this continue.