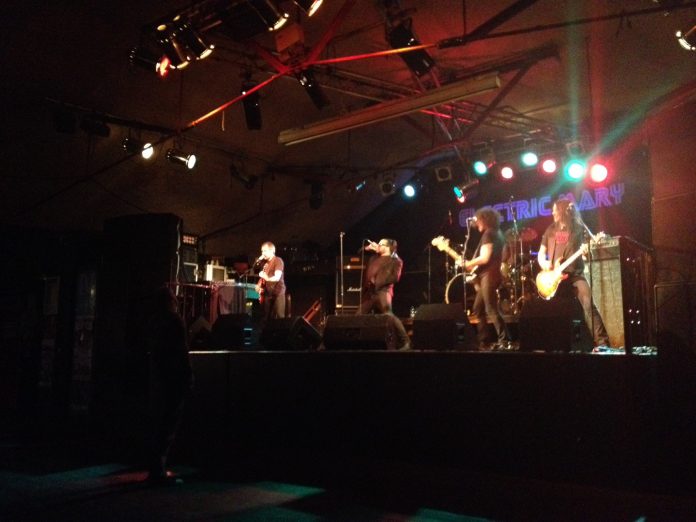 Monday night knob problems as proudly retro rockers come over for a rare UK jaunt and just happen to bring one of the best unsigned bands in Britain along for the ride.

Brighton based three piece MindOfALion are a new name on the landscape. What you need to know for now is they do a nice line in alternative rock. Tracks like “Monopoly” have a big sound and they are evidently a little different to the usual. Single “Zia Ground” is an interesting song and the band, built around the Brewis-Lawes brothers, Archie and Jack, are clearly driven. Archie’s guitar playing is impressive and when they really let go they are at their best.

MVM first saw Broken Chords a month ago opening for Bernie Torme. It was the first night of their tour. Pretty much non-stop gigging ever since has made them tighter than ever. BC are one of those bands that no matter what the crowd (and unfortunately it’s not big tonight) have the quality of grabbing your attention and keeping it. “Get Some,” a recent single, has all the swagger in the world, and “New Thing” possesses a real funky groove. The trio have the confidence of a band who has the inner belief that they can do this, singer/guitarist Joe has a star quality, drummer Jamie and bass man Aiden have an easy charm to go along with their musical abilities – and the former hits his kit as hard as anyone. All they have released so far is a highly promising 10 track demo, but tonight they air a new track called “Rock And Stone” which is instantly a classic rock track in the making. The bass driven “Tell Them Of Us” proves that right now Broken Chords are a band you need to see live. If they can harness the power they show on stage in their forthcoming studio work, then they are going to be very, very good indeed. As they end tonight with current single, the soaraway “Pyro,” the suspicion is that they are only a couple of well-placed festival bookings from being a major band in 2015.

“Black Country, I think I’ve broke your knob,” says Electric Mary singer Rusty. We are three songs in and the microphone stand, well, isn’t standing as it should. But these mishaps are all part of the live music experience, right? Ironically the band just played “No One Does It Better Than Me” but no matter.

Not that it should faze Rusty. Rock n Roll the way it used to taste. That’s his band in their own words. Certainly listening to “Let Me Out” the song they burst out with tonight pre (ahem!) knob issues, it’s hard to disagree. This is pure, unadulterated rock n roll, there are no pretensions here other to plug in, play on and have a good time doing it.

By track two, we are right down to brass tacks: “Do ya wanna get dirty and dance on my grave?” enquires Rusty. He does this during a song called “One In A Million” hiding behind a pair of dark glasses and roaring like Robert Plant. The way it used to taste, indeed.

The band have just released a new EP, “The Last Great Hope” and a track from it,”Nicotine,” adds a blusey edge, as well as as a great lyric in “this is not what I signed up for when you knocked on my front door.” “Already Gone,” another recent song, is slower and more deliberate, as well as having a simply enormous chorus and even bigger guitar solo from Pete Robinson and Alan Thomas.

“O I C” puts us firmly back in riotous rock n roll territory, it’s driving energy shows why it was such a standout on the bands “III” record, before “Hey Now” from their debut years ago does the quiet-verse-loud chorus thing brilliantly. “Sweet Mary C” the lead track on the new EP, on the other hand, injects a harmonica groove to things.

Surveying the crowd and trying to get a singalong going, Rusty deadpans: “tonight we are gonna make 27 people sound like 10,000.” This probably isn’t what they had in mind when they flew from Melbourne, but if anyone’s upset it doesn’t show, and Electric Mary look like the type of band that would have played in your living room if you offered them a gig there. They deserve more. But they were excellent all the same. If this is rock n roll the way it used to taste, then tonight was sweet.