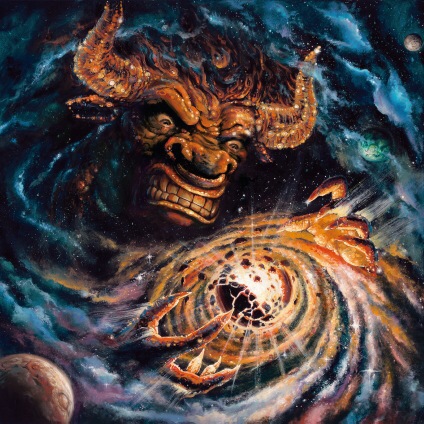 When is a remix album not a remix album? When it’s a “re-imagination” that’s when. Monster Magnet revisit last years record in typically odd style Over 20 odd years Dave Wyndorf has led the various versions of Monster Magnet in whatever way he chooses. But even for him “Milking The Stars” is a weird left turn.

The story is like this: last year Monster Magnet continued their recent creative peak by sticking out “Last Patrol.” It was a return – of sorts – to the psychedelic stuff on early albums, it sprawled and it was fabulous.

The band obviously agreed, given that they played the whole thing live earlier this year on their tour. With that in mind then, this is kinda odd.

They’ve put it out again. Except they haven’t, allow Dave to explain: “This was a happy experiment for me,” he says. “It’s not a re-mix record by the current definition. It’s more like Last Patrol in a “what if?” style alternate reality. “What if these songs were recorded in 1968?” What would happen if I turned a pretty song into an angry one?” How would adding creepy organs and Mellotrons affect the emotional vibe of a song? These are just a few of the questions that roll around in my head when I write and record any album but this time I decided to actually answer them with fully fleshed out, recorded and mixed examples.”

That’s cleared that up, then.

Actually, listening to it, he’s been (largely) as good as his word. “Mindless Ones ’68” takes the stomping brilliance of its parent track and turns into a Doors-like freak out, “End Of Time (B3)” does likewise. Of all the reworked songs though, “Hallelujah” works best.

Transformed here into a kind of Cajun hoedown, it shows a side to the band that few knew existed. The main interest here, naturally, is the new material. “Let The Circus Burn” is a fine opener, while the title track is a huge, lilting work with some psychedelic touches and glorious guitar work. Amongst the new music the instrumental “Goliath Returns” is perhaps the standout, with a genuine, dark feel to it’s shimmering riffery.

Some of the original “……Patrol” songs are good, some not so. “I Live Behind The Clouds,” which began the record last year is here, but slight changes don’t add anything and “Stay Tuned” is now “Stay Tuned (Even Sadder)” and suitably melancholic.

Things end with a new version of “The Duke” and it’s added wah-wah guitar and drums do make this a better take than the one that appeared previously. Overall “Milking The Stars” is a pleasant diversion.

Monster Magnet are a fantastic band with many, many fantastic songs. There are some here that live up to that, and if “Last Patrol” hadn’t come out in 2013 you would have been hailing this as a work of genius. The trouble is it did, and as such, it’s hard to see why this was needed.