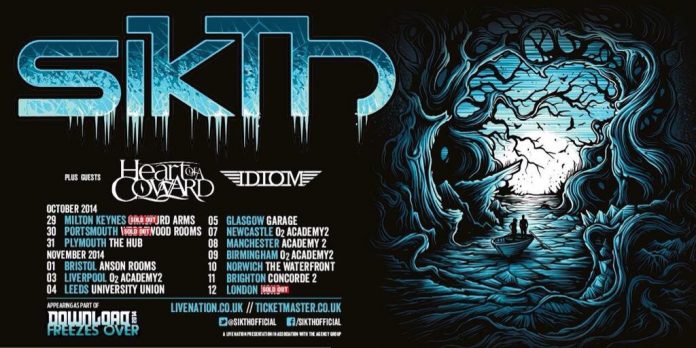 Devon’s Idiom have created quite a profile for themselves over recent months. Largely this has been on the back of their EP’s being given away in Metal Hammer. That coupled with this huge UK tour won’t be doing them any harm at all. Musically they live up to the billing, the tight groove metal of “All I Know” and the gang vocals on “We Live On” are brimful of class and Matt Sharland’s almost boundless energy and vocal range (impressive given that he had admitted to “partying hard” the night before) carry the set – even ending in a moshpit that he started – as opening act Idiom deliver a standout performance.

Heart Of A Coward are another bunch of metallers to pay their dues. The Milton Keynes mob have played never ending gigs it seems since their inception and it shows with a confident display. The set is begun with a brilliant synchronised headbanging display in “Shade.” and the breakdown in the track is nothing short of massive. Musically they aren’t too far away from singer Jamie Graham’s first band, Sylosis. In places they are crushingly heavy, but songs like “Nightmare” have an eye on melody too, all of which means HoaC are, very, very good indeed. They are joined on “Distance” by Justin Hill from Sikth, but they manage just fine on their own. The anger that runs through “Deadweight” is reminiscent of Malefice at their best, and the primal roar that begins “Around A Girl (In 80 Days) is one of a band that means business.

They say something truly groundbreaking isn’t recognised in it’s time. Well, here’s a thing. Back in 2003 a UK band released an album that was brilliant back then but is perhaps only being fully appreciated now. It was too monumentally left field, perhaps, for the mainstream, but that was never the point. That album was called “The Trees Are Dead And Dried Out, Wait for Something Wild,” the band was Sikth. With that record they provided the blueprint for a thousand modern bands to do what they do today. Sikth defy description. Hugely heavy, tighter than a ducks arse, they had two vocalists, they had great big, massive spoken word pieces on their albums (one – “When Will The Forest Speak?” – is aired tonight) but they were never prog. Nothing was out of bounds to Sikth. Then, after a follow up in 2006 they were gone. Mikee Goodman – one of their singers – went off to make videos, and surfaced again in Primal Rock Rebellion with Iron Maiden’s Adrian Smith. It always seemed like they had unfinished business to do, hence there was much rejoicing when they returned for a go at Download, which was followed by this enormous UK jaunt.

So it is then that just after 9-30pm – and after a medley of Slayer and Pantera – that Sikth walk out to a heroes welcome and prove there is still nothing else quite like them. “Bland Street Bloom” – a track from their equally superb second record – begins things here, aiming to pack as many different riffs, breakdowns and lyrics into five minutes as most bands do in a career, “Part Of The Friction” follows, and is slightly less chaotic – it probably passes for conventional in this musical landscape.

A mighty “Hold My Finger” takes us into the world of twisted relationships (seriously read the lyrics! – Ed) as the band showcase their incredible dexterity. Then “Scent Of The Obscene” allows a singalong, as it’s chorus hits home.

Incredibly Sikth seem humbled that fans are still here (“we’ve been away for so long, we didn’t know what to expect,” says Goodman) but as “Peep Show” slows the pace, it’s abundantly clear that these are not just old fans, there are many kids here that would have been too young to know the band originally.

As we approach the end of the main set, a mighty drum thud ushers in “Sanguine Seas Of Bigotry” and “Another Sinking Ship” is as a brutal attack on the media it ever was.

Just over an hour after coming on, as the last strains of “Skies Of Millennium Night” usher the encore out, we can say for sure that Sikth have still got absolutely what it takes, and this tour has clearly been special to all concerned.

Are they going to follow this up with an album? Only Sikth know that. The fan in MVM wants that of course, if nothing else to see what they would come up with now, but if this gig is all we get, then what a way to go out!

Previous article
Evil Scarecrow On The Hunt
Next article
MONSTER MAGNET: Milking The Stars – A Re-imagination Of Last Patrol