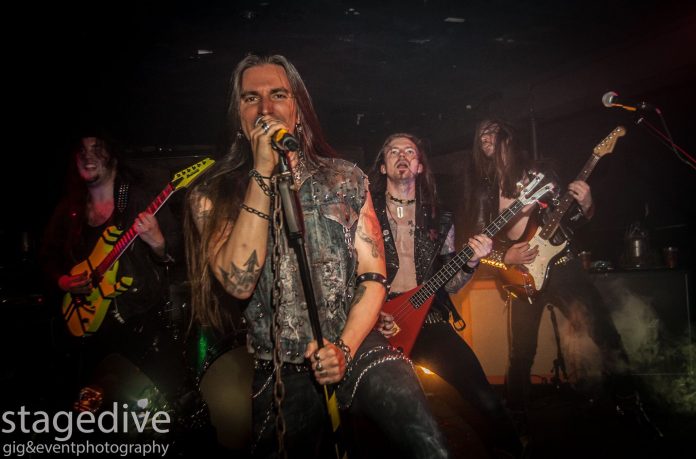 MVM had Coventry’s Pelugion marked out as ones to watch the other week when they opened for Witchsorrrow at a gig just up the road. You always wonder, though, is it a flash in the pan? No chance! “Desire” rocks and rolls like a runaway train, a kind of Middle English take on the Southern Louisiana sound – it’s not burdening the three piece to say they have the ear for a crunch of Corrosion Of Conformity. Andy Sweeney holds everything together with his bass and vocals as the three piece infuse things with a rare groove. The Orange Goblin-like swirl of “Bury Me” will in time induce circle pits, but at this stage in their careers it’s not about that. It’s about experience and impressing. They are getting the former and have done the latter, and with songs as good as “Serpent’s Mistress” in their pocket, they will soon be impressing plenty more.

“Am we alroight, Birmingham?” Enquires Dakesis frontlady Gemma. For the uninitiated, that means simply, “Hello” and also signifies Dakesis are playing a hometown gig. Trends come and trends go, but for years now Dakesis have been doing this heavy metal thing. Over that time they’ve evolved into the leaner, meaner beast they are today, and they are probably heavier now than at any other time in their careers. Gemma taking over as sole vocalist has helped in this regard, and they are now very much a kind of female fronted NWOBHM mixing some of the overt power metal flourishes that were always there. They still play the incredibly OTT “On Wings Of Steel” which they’ve always played, and “Valhalla” still ends things, but “Liar” has a piercing opening riff, while the new song they play “Destined For The Flame” seems to bridge the gap between their old and their new very nicely. They save their best for (almost) last, though and “The Great Insurrection” is worth its big build up.

This might be Noctum’s first visit to the second city, but you’d imagine it’s not their first dip into the home of metal. The quartet deal in a wonderfully 1970s vibe taking in everything from Led Zep to Sabbath and everything in between. It’s clear though, almost from the get-go of “Conflagration” that they are a rawer proposition on stage than on their records. “Temple Of The Living Dead” adds a more epic feel coupled with some Mercyful Fate into the mix for good measure. In other places the solos soar, and when they feel like it they give it a real good gallop too. “Resurrected In Evil” summons all kinds of stuff from who knows where as singer/guitarist David really comes into his own. New single “Until Then, Until The End” proves itself a worthy addition to the live set, and again benefits from its slightly harsher delivery here, and there’s a real ebullience about the band as they play it in an almost gleeful manner. This carefree air is never shown better than on “Void Of Emptiness” which slams home as if there was nothing it would rather do. Their last song is sung in the native tongue (“join in if you know the words,” jokes David) but it matters not. Heavy Metal is universal language and Noctum speak it with tremendous fluency.

You have to hand it to Steelwing. Even if you didn’t know they were a band you’d damn well know they were rock stars. The Swedes give off the air of a band who have stadiums in their sights, never mind the basement of a Birmingham pub. The band (some in shades) start up their opening riff and singer Riley bounds on just after. And, by the great God of Ozzy, can the boy howl. If we suspected that confidence isn’t exactly a problem, then that thought is confirmed by the playing of a brand new song first up. “Reset, Reboot, Redeem” is from their forthcoming third full length of the same name and it’s superb, but it doesn’t alter the template too much. This is trad metal before such a thing was trad. It’s lightening quick, solos are fired out at something approaching breakneck pace, and then there’s Riley himself. How he hits the high notes only he knows, but he doesn’t miss too many. There’s a trip back to the first album for a crushing number or two, there’s another new one and there’s even a journey back to an unreleased early demo “Legion” (“famous from MySpace or something” says Riley). The point is that it doesn’t matter what era they are from, everything here is timeless metal and lovingly put together, by a band for whom this evidently matters and is clearly the only music they’ve ever wanted to play. There doesn’t feel like there’s a fake bone in any of these bodies. There’s even a genuine feel to the question: “Do we have any wasteland warriors in here,” asked right before Steelwing tear through “Zone Of Alienation” and as they end with “Clash Of The Two Tribes” there’s a thought that whilst this is a battle, it’s one that will be won. But before that, there’s an encore – these boys are rockstars after all – and “Roadkill (Or Be Killed)” is nothing more and nothing less than tremendous fun.

As everyone knows, there’s a new album from Iron Maiden this week. But even Eddie (and the boys) aren’t going to be around forever – and the horrible issues Bruce Dickinson has had to deal with this last year have proved that. There are those that think metal is dying and once the big bands are gone so are nights like these. They are misguided fools and they are just wrong. There’s a new breed. This is part of it. Get on board.