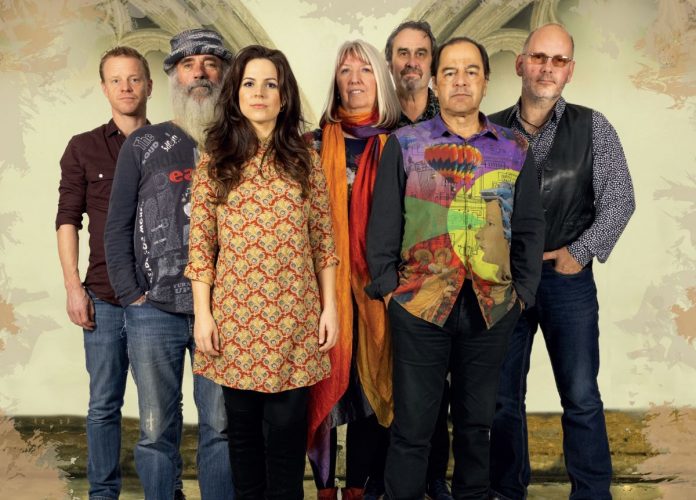 Park Records are delighted to announce the release of ‘EST’D 1969’ from Steeleye Span on 24 June 2019 ahead of UK dates later in the year.  This is a new collection of songs, featuring contributions from all seven of the band members [with a guest appearance from Ian Anderson of Jethro Tull on ‘Old Matron]. ‘EST’D 1969’ captures the ethos of the heritage and history of the band itself, but also the rich vein of tradition that they draw inspiration from, but remains fresh and contemporary. This is a celebration of 50 years but the band continues to look to the future.

‘Space Oddity’. ‘Suspicious Minds’. ‘Pinball Wizard’. ‘Whole Lotta Love’. ‘Come Together’ – 1969 could easily be said to be a vintage year for music, the end of a decade that changed the world and the introduction to one that would prove equally inspirational. It would also see the birth of a band that would start as an idea to electrify traditional music and would go on to become one of the most enduring stories in the folk world and beyond. Over the past fifty years, Steeleye Span have come to define the concept of English folk rock – taking it from the world of small clubs into the charts, concert halls and festivals around the globe.

The story of their career has included incredible moment after incredible moment – taking Latin carol ‘Gaudete’ onto Top Of The Pops, recording with David Bowie and Peter Sellers, showering their audiences with pound notes, scoring a top five hit with ‘All Around My Hat’, touring UK arenas with Status Quo, reuniting virtually all their members for a famous 25th anniversary show and entering their fifth decade as creatively inspired and active as ever – including the acclaimed Wintersmith album with Sir Terry Pratchett.

Featuring some of the most famous names in folk music from down the years (Martin Carthy, Tim Hart, Bob Johnson, John Kirkpatrick, Peter Knight, Ken Nicol, Liam Genockey), the band has perhaps been most identified with Maddy Prior – one of the most distinctive voices in British music. Helping found the band with her musical partner Tim Hart, she has steered Steeleye through their various incarnations, as well as a successful solo career and a number of regular collaborations with the likes of June Tabor and The Carnival Band. Steeped in the mythology and history of the British Isles – and beyond – her lyrics have retold some of the most notable stories in the tradition. Tales of love, tragedy, injustice, murder, revenge and redemption – all have come to personify the band’s musical sound, a marrying of folk tunes with the finest in rock instrumentation.

As they celebrate their milestone anniversary with ‘EST’D 1969’, Steeleye Span show no signs of slowing down. Releasing seven studio and four live albums since the turn of the century, their current seven piece line-up ranks as one of the strongest of their long history and features John Kirkpatrick’s son Benji amongst others. The band perform this summer at Glastonbury, Cornbury and Beautiful Days Festivals and will be touring the UK extensively in Autumn 2019.
STEELEYE SPAN 50th Anniversary UK TOUR  2019