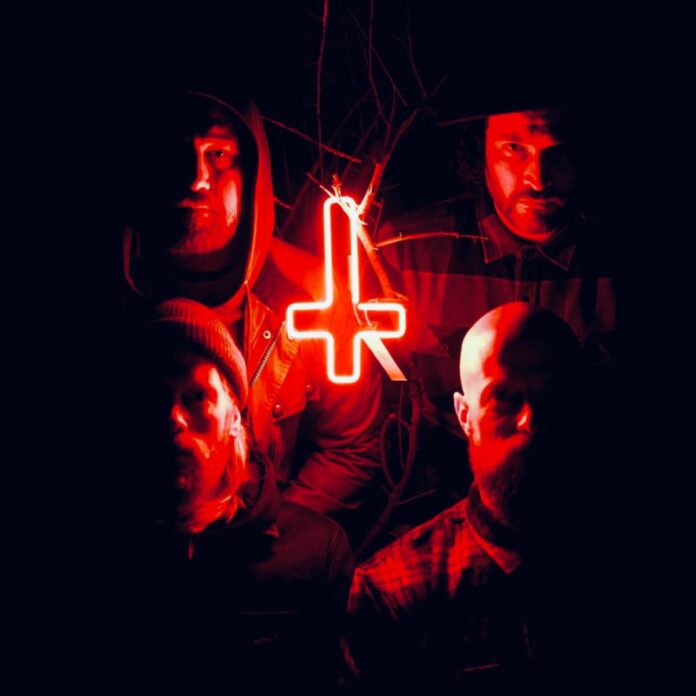 London stoner rock pillars STEAK present a second video taken from their new album ‘Acute Mania’ on Ripple Music as well as the ‘Mad Lord: Samurai of 1000 Deaths’ short film, both to be released on April 1st. Watch “Ancestors” now!

Five years after their Ripple Music debut ‘No God To Save’, STEAK return with their third album and most finely produced work to date, ‘Acute Mania’. Full of the foursome’s unique take on expansive desert blues, this is an ambitious and confident record from a band that has undoubtedly come into its own: intense, brooding, full of hooks and atmosphere, it leans towards a more progressive and post-rock sound, crowned by a gripping performance from frontman Kippa and special appearances from Chantal Brown (Vodun) and Tom Cameron (ex-Crystal Head).

Today they release the ‘Ancestors’ single and video, which images are taken from the ‘Mad Lord: Samurai of 1000 Deaths’ short film written and directed by Samuel Smith, with a score created in conjunction with the band.
⚔️ Watch Steak’s epic samurai video for “Ancestors” ⚔️
+ Stream the digital single

The ‘Mad Lord’ project is a creative collaboration between STEAK and filmmaker Samuel Smith. Together they have produced an interconnected body of work that coincides with the release of ‘Acute Mania’. With the vinyl edition of the album will come the advent of the 24-page ‘Steak: Mad Lord’ comic book. Written by Samuel Smith and illustrated by Rhys Wooton, it brings together STEAK‘s long-established post-apocalyptic future and the Samurai world of feudal Japan taken from the short film ‘Mad Lord: Samurai of 1000 Deaths’, which will be released alongside the album and comic on April 1st.STEAK New album “Acute Mania”
Available on April 1st through Ripple Music