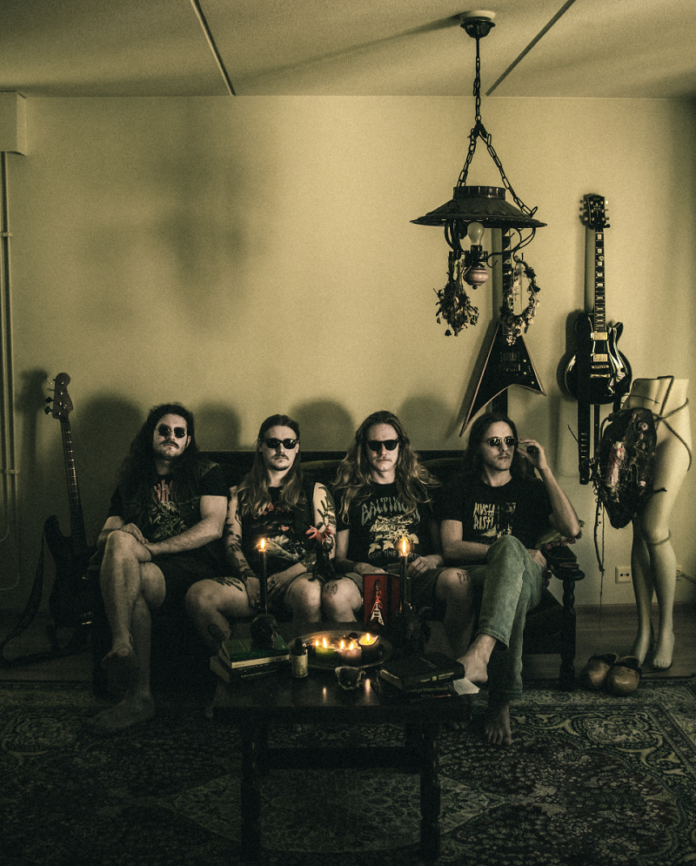 Finland‘s Green King launch the single “Where Speedian Dwells”. The single tells the true story of Green King kicking out violent nazis from their rehearsal space. A true heavy metal attack, “Where Speedian Dwells” offers thrilling guitar harmonies, chugging riffs, and gutsy vocals communicating a strong anti-nazi message. The single is the second one leading up to Green King‘s debut album “Hidden Beyond Time”, which will be released on The Sign Records on December 16, 2022.

Green King explains the story behind “Where Speedian Dwells”:

This song is equally a love-letter to our old practice place called “hellhole”, and equally our antifascist anthem. Hellhole was a smelly basement complex in an old industrial building where people used to party a lot. The song is partly about that place and our love for all the drunken times we’ve spent there.

There’s a line in the song that says “hole caused”. There’s a backstory for that. One time these black metal youngsters, who had their practice room upstairs from our ‘hellhole’, asked if they could do a gig in our place. There was this huge hall in the basement next to our rehearsal rooms and they wanted to play the gig there. Of course we said yes because we wanted to hear these young dudes play black metal. However, it turned out that the audience they brought along were a bit too much into national socialism. There even was this older guy in full SS uniform. Needless to say we weren’t too happy about that and started to kick them out. Like in the movie “Anchorman”, things escalated pretty quickly. With some help from our friends in a band called Baltimor, we finally managed to kick those nazi scums out.

That incident gave this song a whole new meaning, we gave the nazis their own medicine at hellhole, the “holecaust”. The song is called “where Speedian Dwells” because we didn’t want anyone to mix it up with the term “holocaust” so we changed the title and the lyrics. The title is also a reference to those many, many drunken nights spent in our beloved hellhole.

Long story short, this song is about kicking some nazi ass while doing drugs in hellhole. Let this song be our antifascist anthem, our own “Nazi Punks Fuck Off”