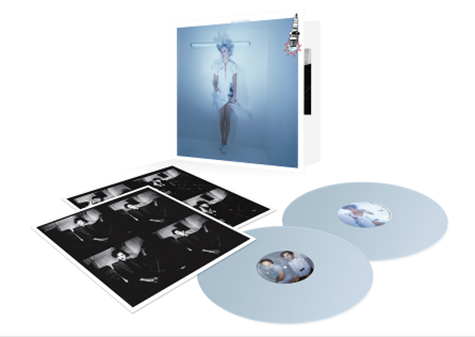 Originally released on March 2nd 1979 , and marking Sparks’ first delving into electronic music –  No.1 In Heaven is now released by the band on their own label, Lil Beethoven Records, to celebrate the 40th anniversary of the seminal album. Formats include a double CD and double heavyweight coloured vinyl with sleeve notes written by Ron and Russell Mael themselves. Available for pre-order from store.allsparks.com

Remastered for both vinyl and CD,  this reissue also includes numerous bonus tracks, including the rare and original Peter Cook promo spots for the record, that were only available on the original UK picture disc pressings of ‘Tryouts For The Human Race’ and ‘Beat The Clock’.

“Virgin Records had the wonderful idea to enlist British comic Peter Cook to do two promo spots for the No.1 In Heaven album. They stood him in front of a mic and let him riff away at the meaning of the syndrum bleeps in ‘Tryouts For The Human Race'”

The No.1 in Heaven album saw a departure from Sparks’ more traditional band format– and saw them collaborate with the renowned Giorgio Moroder to create an album of synth laden electro tracks, sans guitar and bass. At the time the album received mixed opinions from music critics, some accusing Sparks of betraying their pop and rock roots; but forty years and 16 more albums later, Sparks are still confounding, and amazing critics with their genre defying and pioneering music. Now,No.1 In Heaven is seen as an important and essential bookmark in the history of electronic music, inspiring countless other artists.

“The most thrilling albums to make are those where you go in not having much of a clue what you’re doing or where you’re going, and where, at least once every thirty minutes, you ask yourself, ‘Is this what it means to commit both artistic and commercial suicide?’ That was the case with the No.1 in Heaven album.”

Tryouts For The Human Race

The Number One Song In Heaven

Peter Cook’s Promo Spot For No.1 In Heaven

The Number One Song In Heaven (Single Version)

Peter Cook’s Promo Spot For Tryouts For The Human Race