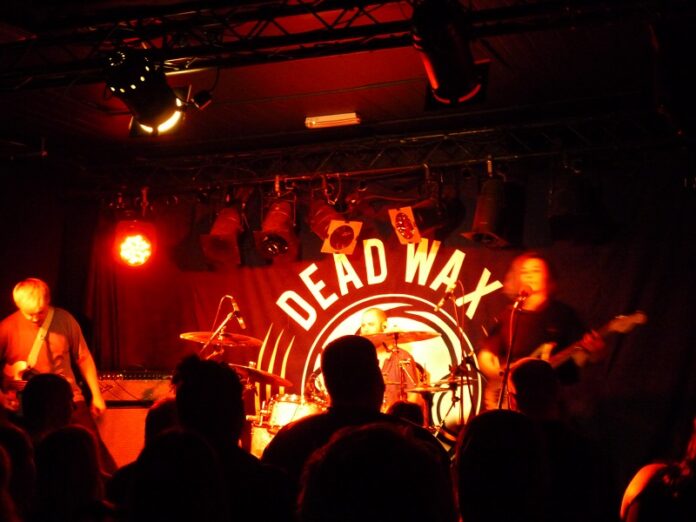 American alternative rock band Slothrust`s wonderful fifth studio album `Parallel Timeline` came out towards the end of ;last year and they arrive in the UK to promote it at nine shows that include the 2000 Trees festival in the spa town of Cheltenham. The opening show is at the trendy intimate Dead Wax in the Digbeth area of Birmingham.

A mixture of American West Coast sixties numbers that include The Doors fades out as the trio arrive on stage and head straight into the quite psychedelic instrumental `Surf Goth` which is well named and a little like Dick Dale on acid at times.

A quick “hello” and we hear the Americana tinged `7:30am` from the band`s debut album. Leah removes the guitar for the first number from the bands latest release with `Cranium` a superbly hypnotic slow burn that has Leah, towards the latter part, picking up the guitar and offer a stunning searing solo.

`Peach` is delightfully bass heavy before we enjoy another new track with `The Next Curse` a climate control crisis track that builds as it progresses and has a spoken word passage midway through before resuming it`s blistering grungy intensity.

We have some older tracks before the furious stop-start `Planetarium` sends this intimate crowd into a frenzy before things cool down a little with the questioning and challenging `Double Down`.

The quite introspective `Birthday Cake` has the audience clapping along before the group share my favourite track off the last release with `Once More for the Ocean` which is every bit as good live. We have an instrumental version of `Over the Rainbow` which becomes a bit of a face off between bass and drums before the thoughtful `Waiting` leaves me pondering on its deeply contemplative lyrics.

This sweltering show finishes with what i`m sure was `Crockpot` and as the dressing room is reached by walking through the crowd, the band decide to stay on stage and share a one song encore instead with the really emotive `Horseshoe Crab`

The lights come on to signal the end and we all file out reflecting on a captivating hour of a mixture of intensive powerful alternative rock tinged with grunge and shades of garage rock with some really thoughtful lyrics thrown in.

This may have been the first gig on the tour but it was a scorcher so it`ll be interesting to catch the trio of Leah Wellbaum (vocals, guitar), Kyle Bann (bass) and Will Gorin (drums) as the show really warms up. Huddersfield, Liverpool, and Sheffield have your asbestos suits at the ready.