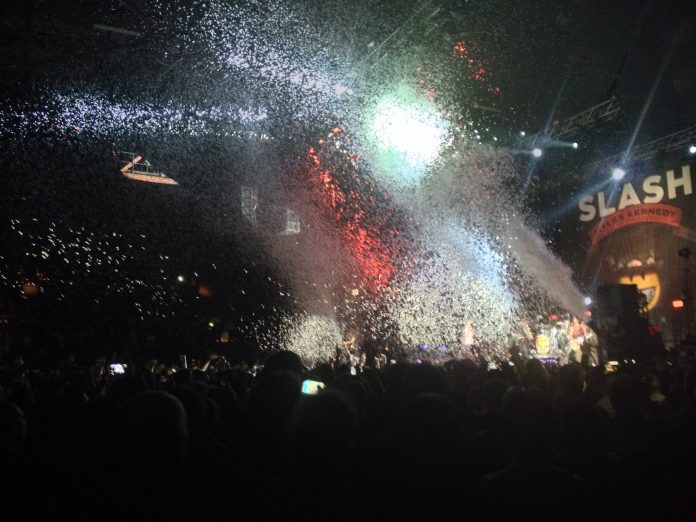 The worlds coolest man? Possibly. Slash (and his conspirators) set the World On Fire in Birmingham

Glenn Hughes was born in the Black Country. If you didn’t know before, he’s seemingly keen that you are made aware. More than a few times he drops this fact in – but then you can forgive Hughes anything when he roars that roar. There is no one quite like Glenn Hughes, and we already knew that too. Now fronting California Breed, Hughes is back in the motherland with a magnificent band.

From the ashes of the equally awesome Black Country Communion (although all comparisons with BCC are pointless given that Jason Bonham left a few months ago leaving Hughes as the only member of the previous trio.) comes California Breed. Hughes like three pieces (and we nearly wrote that he liked threesomes but that sounded wrong….) and he likes to surround himself with a great guitarist or two, so instead of Joe Bonamassa we have young American Andrew Watt, a shit hot player and a brilliant foil for Hughes, while replacing Bonham on drums is QOTSA and Mark Lanegan man Joey Castillo.

With the self titled debut record earlier this year Hughes crafted a load of great tunes which he delivers with unbelievable bombast here. “All Falls Down,” “Midnight Oil” and “Burn” are enormous sounding, pounding, stadium filling anthems, but Hughes probably knows that his days of playing arenas as a headliner are over, so instead he has set about enjoying himself. Which is exactly what Breed seems to be about, three talented blokes essentially jamming until it sounds good. “I’m from the Midlands – I’m not American yet,” says our local hero. That’s sorted that then.

MVM has a question: when did the man Made In Stoke get this big on his own? He used to play the 1500 capacity Academy down the road. Now there’s thousands in a packed LG Arena. The answer is self evident. The ticket sales and the superb music came back about the second he took his Top Hat to Myles Kennedy’s house. The Alter Bridge man is not made in Stoke, but he’s made for Slash, because in the six stringer’s mind he’s not the star anymore – he is, just like in Guns N Roses he was – but he’s happy just being the coolest hard rock guitarist there has been in 30 years. Hell, he doesn’t even come out last to take the acclaim – it’s almost like Saul Hudson doesn’t know he’s Slash….

Anyway, Slash Featuring Myles Kennedy And The Conspirators (to give them their full name) are here because they’ve a new record out, the obscenely good “World On Fire,” but before we get to that there’s a couple from the previous “Apocalyptic Love” and his “Slash” record which you can surmise is because Slash thinks the crowd won’t know the new stuff yet (they do). These – and “Halo” and a soaring “Back From Cali” in particular – are brilliant, but stuck right in between them is “Night Train.” You may know this song. You may know that Slash was once in a band who in 1988 released an album that is arguably the greatest ever made and who are, let’s be blunt, bollocks now without Slash.

Listening to Kennedy wrap his lungs around “….Train” you are struck by the fact that Guns n Roses are more of a covers band than the band doing it on stage right now and “Wicked Stone,” which is the first new song played is built around a swaggering Mr Brownstone-esque riff as if to acknowledge this fact and just in case it hadn’t hit you right between the eyes “You Could Be Mine” follows.

You could argue that he doesn’t need to play the Roses songs if you can find the time in between bitch slap rappin’ and your cocaine tongue, there are two responses. One is that he wants to. The second is that he’s Slash….

The sum total of all this is that – just like last time when he was in this city – plenty of GnR, but for every “Rocket Queen” (which also gives the Top Hatted One a stunning solo spot) there’s a new(er) track to go alongside. There is also a jam session involving Slash and The Conspirators together with Phil Campbell of Motörhead and Hughes. This culminates in key conspirator Todd Kearns stepping to the mic to casually knock out “Ace Of Spades” as if in the worlds biggest garage band, the show has that sort of vibe.

“….Fire” is choc full of brilliant songs, although at 17 tracks its a weighty affair. One of these “Bent To Fly” appropriately takes to the wing in a live setting, becoming very special indeed as it heads for the horizon and leaves us trailing in it’s wake. It’s followed by the title track, the absolute standout in the collection, which does the same, just with turbo.

Is it possible to follow that? Well yeah, if you have this back catalogue. So “Anastasia” is all very well, but there’s the one about a girl with eyes of the bluest skies, that one was kinda popular, before “Slither,” Velvet Revolver’s best, ends the set, after a segue into Bad Company’s “Feel Like Making Love.”

But there’s only one way this was ever going to end. Everyone here knows the score and the song which is your correspondent’s favourite song ever written concludes a set – which to be totally clear – is one of the best gigs you will see this year. He even came on early, have you ever done that, Axl?

So as Slash skips and jumps around just like 26 years ago as a stunned MVM looked on at the video and just knew, as it’s unmistakable strains play, this corner of Solihull is for two hours and five minutes a Paradise City, the grass is green and the girls….

Slash doesn’t need to find a band anymore. He’s got a very, very, very good one, and tonight, right down to the glitter cannons, they delivered a masterclass.