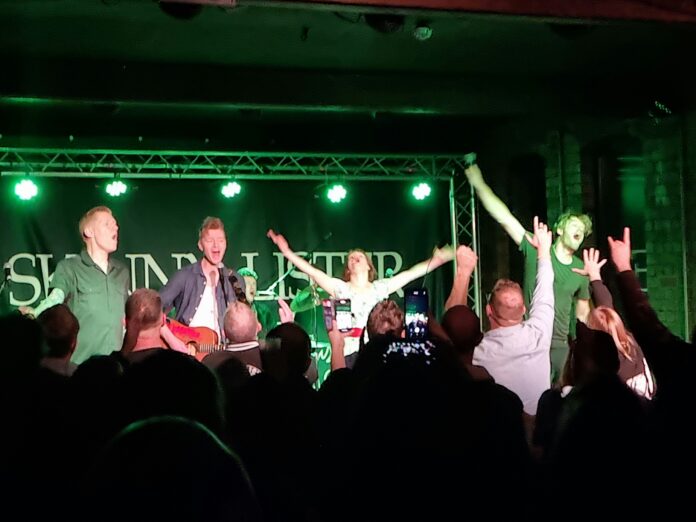 The best place to start here, is right at the end. Skinny Lister are doing “Six Whiskies”. Before they do, they invite today’s supports, Berries and Tom Jenkins, to join them. They do. Along with “Party” George, the dad of singer Lorna Thomas and Accordion player Max. The gang, and it is one, roars it out and it seems to be indicative of a wonderful atmosphere on the tour. The sort of atmosphere, actually, that always seems to follow Skinny Lister around.

Their gigs are like parties, fun, loose and like a giant drinking game. But with five superb records out (and a sixth on the way) there’s a fine body of work to showcase it, and I’d argue that they are up there, with the best at what they do.

Take “Tragedy In Minor” for example, where they appear to channel some sort of Dexy’s vibe, or “Rattle And Roar”, where they stomp about and grab you. They follow these with a couple of new ones from that forthcoming sixth album. “Mantra” as Lorna introduces it, is very much a post-pandemic tune, grabbing the moment, realising what you’ve got. It would be twee in other hands, here though, it seems to fit perfectly. SL are, after all, a band that squeezes every last drop from every last show.

The other new one they play, “Arm Wrestling In Dresden” is classic Lister. A “true” story about an incident in Germany (Thomas, however, is unsure as to its veracity and casts a disapproving eye on her brother), what is not in dispute is that they are superb tunes and bode well for 2023.

At the other end of the scale is “If The Gaff Don’t Let Us Down”, the first single they released, while the likes of “Colours” and “What Can I Say” are lovely folk songs.

The centrepiece of it all, though is “William Harker”, where “Party” George sings what amounts to his own song. It heralds a riotous section. “Damn The Amsterdam” is a sea shanty if the Hells Angels were on the high seas, “38 Minutes” is as punk as they get (and the line about “this is not a drill” seems to underline their “live for the moment” ethos).

Indeed, the way they pack so much into a hour and a half is impressive. “Bold As Brass” brings a ceilidh to KK’s lounge on a freezing Thursday evening, and any time Thomas takes the mic for “John Kanaka” is a cue for all kinds of chaos to ensue. It does. It’s wonderful.

There’s the usual poignant moment with “Bonnie Away” for the daughter of Lorna and other singer Dan Hepinstall and new drummer Tim Hillsdon has fitted in seamlessly as he proves on the closing pair that always seem to perform that role “This Is War” and “Trouble On Oxford Street”.

The encore continues the drinking songs theme, “Hamburg Drunk” and the one that brings us back to where we started.

This is a show of warmth, of camaraderie and of friendship, but more than that – and this mustn’t get lost along the way – Skinny Lister don’t do it like anyone else, and they are a genuinely gifted folk band. They just happen to love the release of playing live.