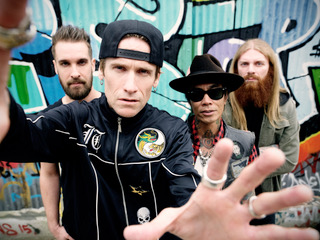 JOSH TODD & THE CONFLICT unveil the powerful, new music video for the track, “Rain’, taken from their debut album, Year of the Tiger, out September 15th on Century Media Records.

The conceptual clip was directed by Billy Jayne (Buckcherry) and shot in downtown Los Angeles. See below to check out the new video and access the pre-order links for their debut album. The band will be touring world-wide throughout 2017/2018.

Year of the Tiger was co-produced by guitarist Stevie Dacanay (Buckcherry) and Stone Temple Pilots drummer Eric Kretz. The aforementioned new disc is also now available for pre-order (see below) and anyone pre-ordering Year of the Tiger will also automatically receive the instant-grat track of the title song.

Todd states: “The song ‘Rain’ I actually wrote a capella with my voice to start. I had all the lyrics and melodies written when I sang it to Stevie (guitars). I told him that I wanted a ‘we will rock you’ beat with stomps and hand claps with a signature guitar solo. I left the the track with him and shortly thereafter the song basically wrote itself. Stevie accomplished everything musically that I wanted and wrapped it up with some nice dynamics.

“At that time I wanted the lyrics to reflect my thoughts, and my thoughts at that time were my life is mine, beliefs only have power if you believe in them, how can I describe the outlaw inside me, inside everyone, amends/karma, it means nothing. Simply kill or be killed. That’s the way it is in the animal kingdom and humans are no different, we just think we are. I just started writing and it came very easily. That’s when I knew we had something. I think ‘Rain’ has that genuine one-time listen impact and those type of songs are hard to come by.

“I wanted the video to be edgy, so naturally I called upon renowned director Billy Jayne, who shot the Buckcherry videos for ‘Gluttony,’ ‘Bring it on Back’ and ‘Say Fuck It’ and really understands what we are trying to achieve. We wanted it to be like the movies Heat meets to Live and Die In LA with me coming in and out narrating it with the melody.

“The concept is a bunch of gangsters get robbed by some fake DEA agents and throughout the video the gangsters find out who did it, hunt them down and kill them all. We picked some iconic locations in downtown LA to shoot and being a California native it was very cool for me. Wanted it to look like a short film and Billy captured all that and then some. Enjoy!”
JOSH TODD & THE CONFLICT is: