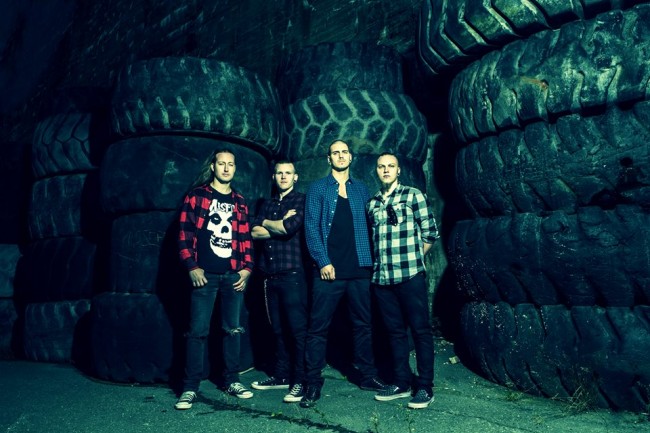 New video for Up In Smoke out now

Formed in 2008, Shotgun Rodeo are a four piece heavy metal band hailing from the city of Trondheim, Norway. Following on from their previous EP releases ‘Dead End Massacre’ (2012) and ‘Guilty as Charged’ (2013), the band are now gearing up to release their debut full-length album, ‘World Wide Genocide’.

Seamlessly cruising across a sea of metal styles and sub-genres, Shotgun Rodeo’s debut album blends groove metal and hook driven riffs with thrash infused vocals and power metal overtones. There are also hints of death-metal strewn throughout the album in the vein of Dark Tranquility or more prominently, Entombed.

At times, ‘World Wide Genocide’ feels like a release that could have been heard on Roadrunner Records during their heyday, but it could equally feel at home with the likes of Nuclear Blast or Spinefarm Records. The diversity of the album’s 13 tracks surpasses any premeditated sonic expectations that the listener may have had before listening. Tracks such as ‘Skin Crawl’ call to mind the sound of Dimebag’s groove driven guitar work in ‘Cowboys From Hell’-era Pantera, whilst the vocal style leans more towards the abrasive and textured sound of Lamb of God or Chimaira. Elsewhere, ‘Scavenger of Death’ and ‘Up In Smoke’ merge an altogether a more Hatfield infused thrash metal vocal style, whilst ‘Withered Earth’ fully exhibits the bands power metal elements and technical proficiency of both the rhythm section and guitars.

It’s an interesting combination which seems wayward upon first inspection, but overall the album is incredibly methodical, and it’s this vast range of influence and Shotgun Rodeo’s clear knowledge and love for metal heritage that makes it work.

As a first full-length album Shotgun Rodeo have shown a lot of promise for what is yet to come. This is an album that will appeal to many different listeners from the metal world and is one that is both nostalgic and forward thinking. It’s time to start paying attention to Shotgun Rodeo, because after 7-years they are finally ready to make their mark.