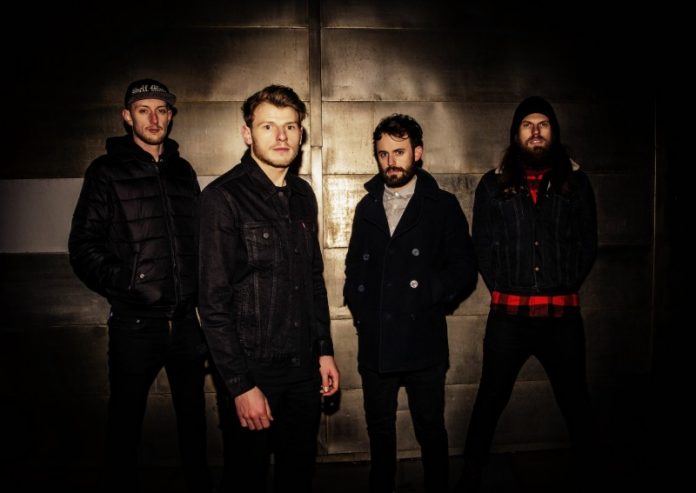 British four piece BOY JUMPS SHIP have revealed the details of their debut album. Entitled ‘Wake Up’, the band’s first full-length will be released via AMAZING RECORD CO on April 22nd.

Hailing from the North-East of England, BOY JUMPS SHIP have gained a reputation for their energetic, passionate and exuberant live performances up and down the country and around Europe. Touring with the likes of Only Rivals, Young Guns, Arcane Roots and We Are The Ocean to name a few, as well as the UK leg of the 2015 VANS WARPED TOUR, audiences found themselves instantly connecting with their unavoidably addictive, massive melodic choruses and heavy-hitting riffs.

With the aid of a generous grant from the PRS FOR MUSIC FOUNDATION’s Momentum Award, the band headed down to The Premises studio in Hoxton, London, working with producer Larry Hibbit (Hundred Reasons, Marmozets, Nothing But Thieves) and ending up with the 12 tracks that make up ‘Wake Up’.

“Without the amazing support we’ve had from the PRS Foundation we wouldn’t have been able to make the record, the work they do for bands like ourselves is so vital, we couldn’t be more grateful.” Says frontman Si Todd. The band took advantage of the financial freedom the award allowed to work with a long admired producer, Larry Hibbit.

“Larry helped us to capture the sound of our band exactly how we imagined it.’Continues Si. “We’ve always said that when we eventually recorded our debut album, we would take our time and get it right. From a performance aspect, we all pushed ourselves to completely different levels this time around, we put our heart and soul into these songs and we couldn’t be more proud of how they turned out!”

Following conversations with various labels wanting to sign the band after hearing the end result, the band opted to go with Newcastle based AMAZING RECORD CO. Says Si:

“Signing to Amazing Record Co. was pretty special for us. We wanted to make sure that our album found a good home and we definitely feel like we’ve achieved that with these guys. Even though we plan on taking this thing as far as we can globally, we always want to make sure that we remember our roots and where we came from. Having a locally based label with the same vision and aspirations as we do makes it all a bit more exciting.”

‘Wake Up’ is released via AMAZING RECORD CO on 22nd April and is available for pre-order here: https://BoyJumpsShip.lnk.to/WakeUp

BOY JUMPS SHIP hit the road next month as main support to Scottish rockers FATHERSON. Catch them at the following shows in February 2016:

The band will also play a one-off special launch gig in their home town on 23rdApril at Newcastle’s O2 Academy 2. Tickets available here:http://smarturl.it/Wake-Up

Further shows are being planned with a full UK headline tour to be announced in the coming weeks.

Previous article
Stars In Their Eyes
Next article
Crack On(line)