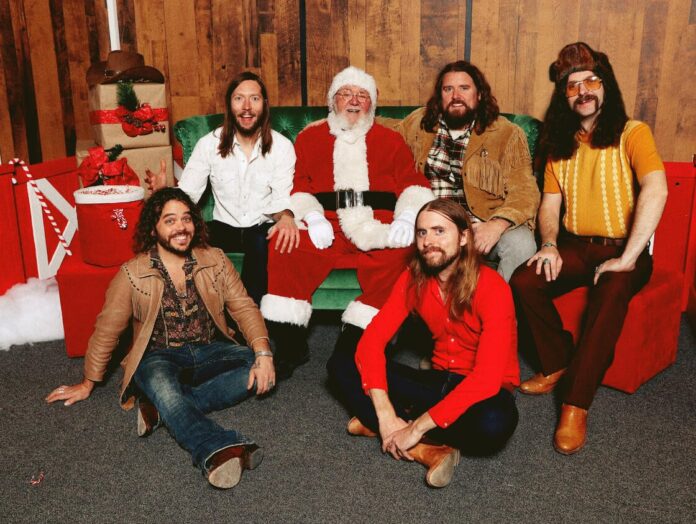 Frontman Ewan states, “I always wished there were more rock n roll Christmas songs. We figured the world could use a fresh alternative to the same old Christmas Carols so we decided to take a stab at creating our own. It was fun trying to come up with a song that we hope people will include on their Xmas playlists alongside the likes of Bing Crosby and Mariah.”

The Sheepdogs recently released their new studio album, Outta Sight, to international acclaim. In a feature interview published this week, Rolling Stone called the latest effort, “…meat n’ potatoes rock, shot through with the type of swagger and grit that once powered rock radio.”

What better way to get into the festive spirit than a new track from The Sheepdogs; a band who, coming from Saskatoon, Saskatchewan are surely experts in navigating deep snow, building log fires and enjoying some festive spirit.

Recorded in Toronto on the hottest day of the year last August, the band had to tap into their imaginations to create that Christmas vibe.

Currently on tour in North America the band have now played 70 shows this year, touring extensively following the release of their latest album Outta Sight earlier this year.

With 22 shows remaining of 2022, the important question remains… Are The Sheepdogs Ready For Christmas? Well, Ewan says he definitely is – “It’s been a busy year and I’m looking forward to spending some time with my family, putting my feet up, watching some football and eating a turkey leg. Merry Christmas folks!”

See below for upcoming tour dates and check the band’s website for ticket information.

January 15 – Victoria, BC @ The Royal Theatre

Previous article
BLACK STORM RIDERS
Next article
THE OBITUARY OF EVERYTHING