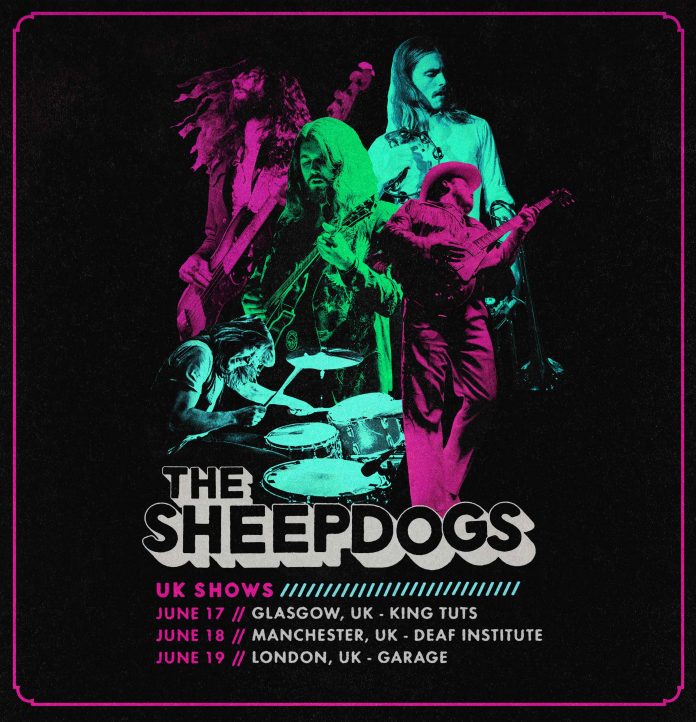 Currently amidst a UK support tour with Rival Sons, Canadians The Sheepdogs have announced a run of three UK headline shows for June, on sale now and includingLondon’s Garage on June 19, 2019. The quadruple Juno Award-winning quintet recently released the new video for ‘Saturday Night’, lifted from their roundly-praised latest album ‘Changing Colours’, out now through Dine Alone Records. Watch here.

Proud purveyors of guitar-driven, modern-day retro rock, The Sheepdogs have expanded their instrumentation on ‘Changing Colours’ to encompass more styles and hues, enhancing their beef-and-boogie riffs and rhythmic shuffles. Of ‘Changing Colours’, the band notes; “This album has a much wider range of sounds on it: trombone, clarinet, latin percussion, pedal steel, fiddle and banjo all make an appearance. The title ‘Changing Colours’ really lends itself to these different sounds on the record.”

The Sheepdogs have crafted a bustling back-catalogue of albums during the course of their career – including a Patrick Carney (Black Keys) produced album – notching up three no.1 singles and earning four Juno awards along the way. The Sheepdogs came to prominence with their bold take on classic guitar rock and polished sound, appearing as the first and only unsigned band to appear on the cover of Rolling Stone, subsequently leading to a performance on Jimmy Fallon, a support tour with fans of the band, Kings of Leon, and festival dates including the likes of Coachella, Lollapalooza and Bonnaroo. Furthermore, the band have previously shared the stage with Paul Rodgers, lead vocalist of Bad Company and Free, won the approval of David Crosby and Steven Stills and performed at Petty Fest alongside the likes of The Strokes, The Black Keys and The Hold Steady.