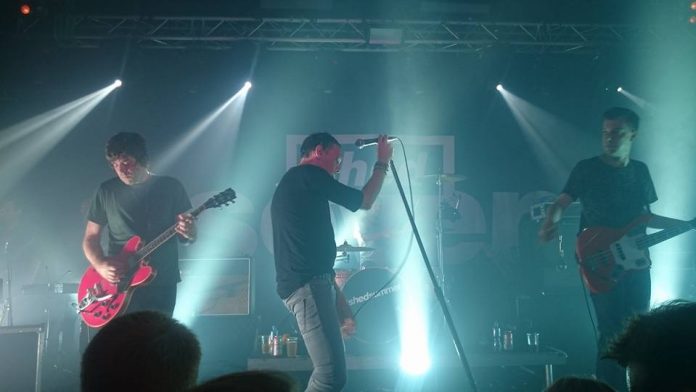 There ain’t no time like the 28th time
Shed Seven gig is always a great night out…..throw in that it’s a new venue on a Thursday night and that its my 28th Shed’s gig in 17 different locations of varying sizes and you have a recipe for a proper good time.
The venue in question is The Empire in Coventry, it’s dark and dingy and absolutely brilliant, it was not quite a sell out but probably only a couple of dozen off capacity…..we made our way down the front as always to check out the support act Apollo Junction who I must say were a decent opening act…..but we were there to see the mighty Shed’s.
Rick & the guys burst onto the stage with the mega opening track ‘She Left Me On Friday’ which always gets the crowd going…..as if we needed any prompting, that was followed by fan favourite ‘Mark’ from the excellent debut album ‘Changegiver’ and ‘Around Your House’…..always good to hear that again.
The inclusion of the anthemic ‘Ocean Pie’ is a gimme but curious to see it so early in the set…..who cares….it’s an awesome track that IMHO is one of the best three songs recorded in the 90s….the crowd absolutely belted out every word with everything they had which is the norm these days at a Shed’s gig…..If Rick Witter ever needed a night off we would sing every word for him at the top of our voices such is the passion and enthusiasm that the audience has for this band.
Tracks such as ‘Where Have You Been Tonight’ with the rasping Paul Banks riff ‘Cry For Help’….the phenomenal ‘Dolphin’ and ‘Getting Better’ which always includes Rick’s visit into the front row and sometimes beyond for a little bit of crowd participation (been involved in a few impromptu sing alongs myself with Mr Witter) followed…..the crowd were in full on frenzy mode by now but it’s always good natured (apart from a couple of clowns in Bristol last December) and everyone keeps an eye out for each other…..the joys of an older crowd who drink plenty but don’t feel the need to fight the world.
The home straight of a Shed’s gig is always packed with classic after classic after classic (how Oasis, The Bluetones, Ocean Colour Scene etc were bigger than the Shed’s just bewilders me and always has) …..we had ‘Disco Down’ ‘Bully Boy’ ‘On Standby’ and ‘Going For Gold’…..any band would be chuffed to bits to just have those in their back catalogue but it’s just a small selection of the wealth of great songs Rick & the Guys can choose from.
The encore is the stunning ‘Chasing Rainbows’…..a track that has every fan reaching into their very soul to pull every last note that they can muster to finally lift the roof of the venue…..the crowd sing along at the end of the track almost lasts as long as the track itself…..but we all have to wait for one final thing before we can call it a night…..the traditional Alan Leach somersault over the drum kit….it doesn’t always go to plan but it has to be done
Each time I see the band play they just get better and better and are so tight they should be sponsored by 70s lunchbox manufacturer Tupperware…..not only are they one of the best live bands around they are a real good bunch of guys too. They head off now to finish their festival run before the announcement early next year of the traditional bi-annual Christmas or ‘Shedcember’ as we now call it tour…..if you are a fan you won’t miss it, if you are curious then just buy a ticket and I guarantee you’ll have a great time…..if you aren’t a fan you probably won’t be reading this so who cares anyway.
Once again a big thank you goes out to Rick, Paul, Alan, Tom & Joe for another fantastic night out…..here’s to Shed gig number 29, 30 and hopefully many more.
Garry Foster
Unchained: Tuesday’s 10pm-Midnight
Prog Rock Files: Thursday’s 10pm-Midnight
101.8WCR FM & online at www.wcrfm.com