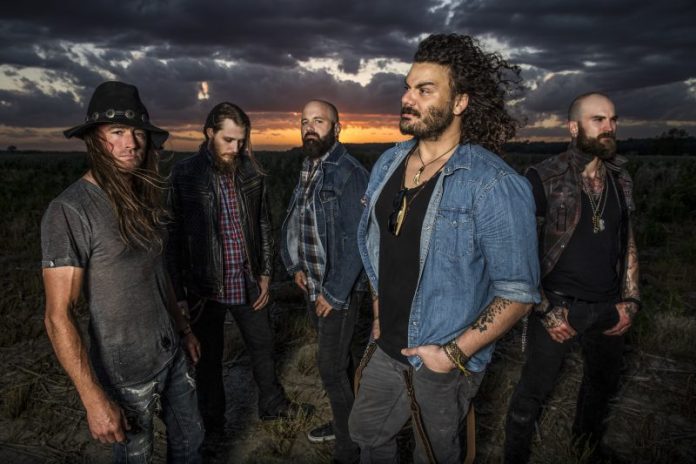 Shaman’s Harvest are back with the brand new video for ‘The Devil In Our Wake’. The track comes from their latest album Red Hands Black Deeds, which was released last year via Mascot Records. Produced by Keith Armstrong, the album pre-meditatively took on a more organic approach, utilising vintage gear.

Talking about the song, Singer Nathan Hunt offers, “”The Devil in Our Wake” tackles the topic of war. “I’d go to bed with CNN on to some bullshit at the White House, or the heartbreaking situation in Syria. I’d see what’s going on in the world and think, ‘Shit, how did we get so divisive?'”

Red Hands Black Deeds is a darker, visceral, and more layered sound than past repertoire. The album ranges from the ominous, haunting vibes of the title track prelude, “A Longer View,” “The Devil In Our Wake,” and “Scavengers” – which could fit just as easily on a horror film soundtrack as it does on this rock band’s album – to quieter, more vulnerable moments as heard on “Tusk and Bone” and “Long Way Home.” Lyrically, the band also ventured into new territory, taking on the current political, social, and economic struggles the USA is facing as a nation under the new administration. “Red Hands Black Deeds touches upon the darker nature inside all of us,” says Hunt. “The whole record has a contrast and push and pull tension – a juxtaposition of good and bad or questioning what is right and wrong. The record ended up having a concept, though we weren’t intending it to,” says Hunt.

Their Mascot Records debut, Smokin’ Hearts & Broken Guns in 2014, garnered more than 33 million streams. The album’s “In Chains” peaked at #11 on the Media Base chart after a run of 22 weeks at Active Rock radio. It also spent over four months in the Top 10 of iTunes Metal Songs Chart. The song’s video has more than 3 million views on YouTube, while the band has a cumulative 8 million YouTube views.

Shaman’s Harvest has had equal success on the touring front. They’ve toured or shared the stage with; AC/DC, Alice In Chains, Godsmack, Breaking Benjamin, Seether, Nickelback, Three Doors Down, In This Moment, Daughtry, Cheap Trick, Theory of a Deadman, Hinder, and others, and played major festivals like Rocklahoma, Rock on the Range, Rock Fest, KRockathon, Rockin’ The Rivers, Texas Mutiny, Rock Carnival 2016, High Elevation Rock Festival, and Midwest Rock Fest.