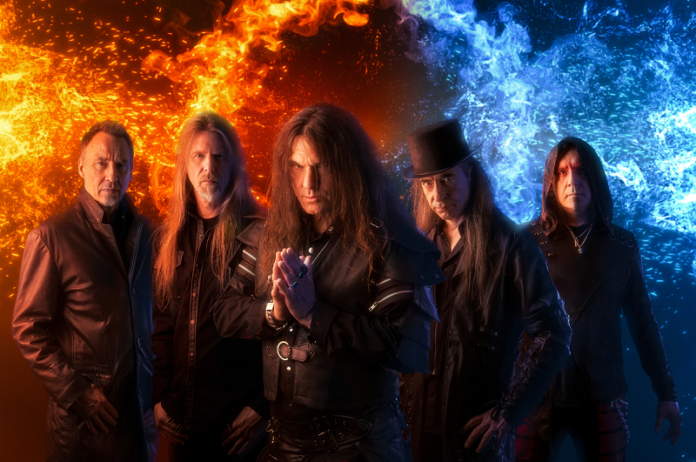 Frontiers Music Srl is pleased to announce the signing of All My Shadows, a new hard rock quintet formed by Vanden Plas members Stephan Lill (guitarist) and Andy Kuntz (vocals). Their debut album, ‘Eerie Monsters’, will be released on 17th February 2023, with a first single and video from it for the song ‘Silent Waters’ available from today.

Stephan Lill is the guitarist and musical backbone of the internationally renowned progressive metal act Vanden Plas, while outside the band he has also been involved in the rock operas and theatre productions for ‘Ludus Danielis’, ‘Christ 0’. ‘The Chronicles of the Immortals’, ‘Everyman’ and ‘Last Paradise Lost’.

Andy Kuntz is the charismatic lead singer of Vanden Plas. His versatile and powerful voice has established him not only in rock/metal, but also as the lead in multiple rock musicals and operas, including the above. As the main lyricist and vocal melody writer for Vanden Plas, he is the chief partner in crime of Lill.

“The idea of releasing some hard rock songs is something I’ve been thinking about for a while,” explains Lill. “While composing, I kept coming up with songs that had the spirit of the ’80s. As a big fan of bands such as Whitesnake, Ozzy Osbourne and Dokken, I still have a huge love for music of that era. The goal was to transport that classic music into the here and now. Hard rock with a powerful production, peppered with modern musical elements.”

His original idea for All My Shadows was to have Kuntz write the lyrics but different vocalists appear on each song. However, as soon as the two had demo-ed the first four songs, it was obvious that Kuntz was the man for the job. “Why look far and wide for other good singers if the perfect one is already there?” Lill muses.

With Frontiers suitably enthused by what they heard and on board to release the finished results, the duo were keen to create a completely new entity for their new project, with All My Shadows chosen as the band’s name as they think “it perfectly reflects the dark colourful aura of the lyrics and melody lines,” adding that the album is “an exciting musical journey through time, transporting our widely branched heavy rock roots into the present day in a melodically exciting symbiosis of retro ambience and modern sounds. Sonically, we feel that it is somewhat related to bands like Ghost, Stone Sour and SOEN, with the music unfolding in an intoxicating manner. It’s time for the New Retro-Rock!”

Joining Lill and Kuntz in their new endeavour are virtuoso keyboardist Markus Teske (who is also the owner of Bazement Studios and has been mixing Vanden Plas albums for two decades), bassist Franky R. (who has played with the likes of Michael Schenker) and highly skilled drummer Andreas Lill (brother of Stephan and also the sticksman in Vanden Plas).

When asked if All My Shadows might veer too close musically to Vanden Plas, they answer with a resounding “No!”, with Lill stating that “Vanden Plas stands for progressive metal in all its variations, while All My Shadows stands very much for hard rock. Musical points of contact are there, overlaps are not. All My Shadows have all the characteristics to have their own identity.”