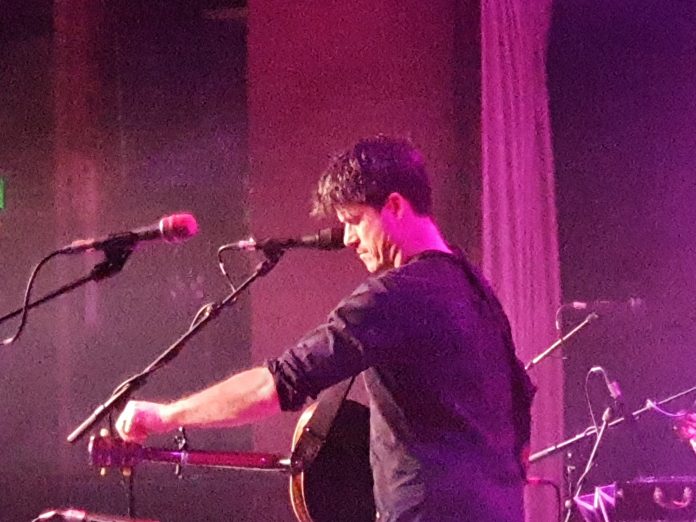 There is something so pleasing about one of Britain’s foremost folk acts playing a tiny little venue in a small Worcestershire town.

The answer as to why Seth Lakeman is in Droitwich, lies in the fact that his brand new record, “A Pilgrims Tale” – out the very day of the gig as it happens – is a wonderful concept piece based on the Mayflower crossings 400 years ago.

And the reason he’s here is Edward Winslow.

Winslow was one of the four men who commissioned the ship for the journey and his son Josiah was the first native born governor of an American Colony.

He also documented a three-day harvest celebration in the autumn of 1621 which became known as ‘the first Thanksgiving’. The Winslow Family have the most descendants in America of all the Pilgrim Fathers.

And he was born right here. Which makes Droitwich the perfect place for Lakeman, Benji Kirkpatrick, Ben Nichols and Alex Hart – who’s harmony vocals and Harmonium playing really illuminate the songs  – to play “….Tale” from start to finish, in one piece.

There are no breaks in it either, save for the narration of Paul McGann taped in, meaning the power of everything from “Watch Out” to “The Mayflower Waltz” comes through.

It contains some fabulous moments too. “The Great Iron Screw” is glorious in this setting, almost sounding like the sort of musical number that no doubt usually takes place in this room,  while “Bury Nights” is absolutely haunting.

“Digging Song”, the part of the story where the settlers and the natives find some accord is uplifting too, but actually watching these songs here, really underlines the point that I made in my album review earlier this week, that the record is one that works best as a whole piece. That’s not to say that it hasn’t got some songs on that would standalone, just that performed (and that is an apt word, as it has the feel of a recital) here, then “A Pilgrims Tale” sounds fantastic.

The first half done, Lakeman and the band are back for “some that you may know….”

What that equates to in practice is some of the mostly early material, “The Bold Knight” from the 2004 record even begins the set, and a lot from the classic “Freedom Fields” era. “Setting Of The Sun” and “Lady Of The Sea” – which he performs solo, take on such an intimate feel to match the surrounds.

“The Colliers” – as ever, turned into the most unlikely singalong – is a real highlight, and “Kitty Jay” dedicated to a friend who’s funeral it was today, is a wonderful, emotional set closer. In-between, though, they’d played a new song, “Change” “written just weeks ago” and evidence if it were needed, that this is an artist that is always creating.

The encore sees “1643” another of the “…Fields” tunes, before things come a little bit more up to date with “The Last Rider” which emerged back in the last decade.

Notwithstanding that, though, and this is meant as a compliment, it is very much as if you are stepping back in time with Lakeman here tonight. Setting sail with him, if you will, to the real rugged folk stuff at the outset of the solo career, and the real cosy feel of it is superb.