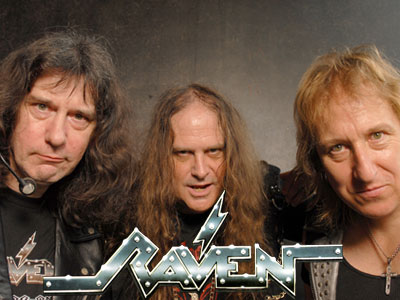 Seminal British heavy metal trio Raven have lined up an October UK tour in the wake of a slew of rave reviews of their new studio album ‘ExtermiNation’, released in Spring 2015 on Steamhammer / SPV. Dates are:-

Formed in Newcastle in 1974 by brothers John and Mark Gallagher, Raven soon developed their own unique, highly energized ‘Athletic Rock’ live rock show; wearing guards, helmets and plates from various sports such as hockey, baseball etc, the manic interaction between band members (let alone the audience!) was guaranteed to be electrically charged.

By the end of the decade Raven had signed to Neat Records, the legendary low budget label from the North of England, who released the band’s ground breaking debut album ‘Rock Until You Drop’, which was awarded a five star review by legendary scribe Geoff Barton in Sounds, in 1981. Both ‘Rock Until You Drop’ and the follow-up, ‘Wiped Out’, released in 1982, breached the top 75 of the UK’s national album charts.

Raven then signed to New Jersey’s Megaforce label, who released their third album ‘All For One’ in 1983 and brought the band over to tour America with Metallica SUPPORTING them on their East Coast tour, on which Anthrax also played their first ever gig. Megaforce boss Johnny Zazula was so impressed he became their manager, brought them back over to the States to live and secured a major record deal with Atlantic Records. The band’s 4th album, ‘Stay Hard’, in 1985, fared impressively on the Billboard Top 100 album chart, boosted by a Top 100 single and video for the track ‘On and On’.

But then Atlantic pushed Raven along a more slick, lightweight, commercial path for the band’s subsequent 2 albums, ‘The Pack Is Back’ (1986) and ‘Life’s A Bitch’ (1987), which, apart from alienating the band’s core fans, did little for their career and the label and band parted company in 1988.

Raven then dropped their outlandish image, returned to a more basic denim and leather look and released ‘Nothing Exceeds Like Excess’ on the Combat label, in 1988, just as grunge was taking off in the States. Raven soon returned to Europe and signed to SPV Records, who released ‘Architect Of Fear’ (1991), ‘Glow’ in 1994, ‘Everything Louder’ in 1997 and ‘One For All’ in 2000.

Then tragedy struck when a wall collapsed on guitarist Mark Gallagher in 2001, crushing his legs. Raven went on hiatus for most of the rest of the decade while Mark rehabilitated, before tentatively playing live again in the UK in summer 2008. Hugely encouraged by the crowd’s reaction, Raven spent the rest of the year writing ‘Walk Through Fire’, which was recorded in Spring 2009 and released on SPV in March 2010.

Malcolm Dome reviewed the album in the magazine’s May 2010 issue, stating that “Walk Through Fire’ is the best record since 1985’s ‘Stay Hard’. What the band have done is strip away any pretensions towards maturity or becoming elder statesmen of metal and gone straight for the jugular. This is a no-holds barred, full-on attack. The sort of thing Raven do well. Led by bassist / vocalist John Gallagher, a man with a banshee wail so high he makes King Diamond sound like Cronos of Venom, Raven revel in songs like ‘Breaking You Down’, ‘Bulldozer’ and ‘Armageddon (The Beginning)’. Those titles say it all. All fired up, Raven still deal in pure metal.”

In the Summer and Autumn of 2013 Raven played their first full scale tour of the US since 1989, headlining on the East Coast and joining forces for a double headlining jaunt through the West Coast with fellow UK NWOBHM stalwarts Diamond Head. November/December saw the band playing Europe with old mates Girlschool as support, garnering rave reviews for their explosive performances.

In March 2014 Raven opened for Metalllica in Sao Paolo in front of 70,000 fans, and then set off on a 43 date headline USA tour, prior to returning to the UK to put down ‘ExtermiNation’ in the Autumn.

‘ExtermiNation’, an even more accomplished, intense, inspired, exuberant, true heavy metal offering than its predecessor, combines the melody/chaos/musicianship/lunacy that defines the band with songs that are simply the best Raven have recorded in decades. ‘ExtermiNation’ is the sound of a band totally on fire, of a unique power trio who have effortlessly pushed the envelope to up their game to the next level.