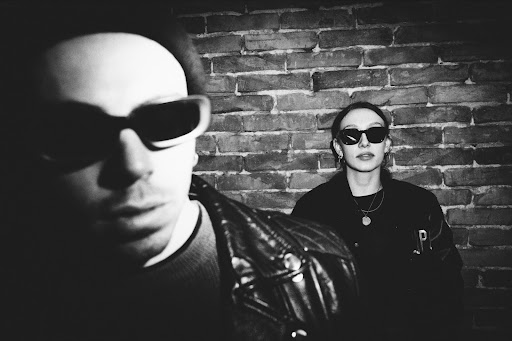 Released Today, “Eremita” is the new single by HATE MOSS.
WATCH THE VIDEO HERE || STREAM ON ALL SERVICES HERE

The track is taken from the Italo-Brazilian industrial / post-punk duo’s upcoming second album ‘NaN‘, which is confirmed for release on 20th May 2022, via Stock-A Productions.
The follow-up to recent single “Fog”, new single “Eremita” is a transportative ballad in 5/4, with downbeat and sensual fusions of lo-fi glitches and acoustic instrumentation that nod towards the classic trip-hop sound.
With its lyrics softly-sung in a hushed Italian dialect, the track explores a one-way conversation with an egotistical protagonist. As Tina of Hate Moss says:

“It’s a hypothetical dialogue with an interlocutor whose only interest is to assert one’s opinion on others, the voices at times distant and at times incredibly close join the guitars and samples.”
Bringing to mind the broodingly intense works of Dead Can Dance or Liars, crossed with the philosophical songwriting of De André and Tom Zé, it’s a twitchingly paranoid and quietly exhilarating hint of what to expect on new album ‘NaN’.
Directed by Ian Carvalho, the single is accompanied by a misleadingly lo-fi video, which reveals hidden depths with repeated views. Shot by the band in a single-take using the Datamosh technique, it follows the band as they traverse through the scenic town of Monopoli in Puglia, Italy. The Mediaeval setting of warm-colored palaces on a summer evening soon begin to glitch chaotically with pixelated footage; and hint that all may not be as it seems… Speaking about the video Tina adds:

“The idea of ​​contrasting the beauty of that historic city centre with the digital “dirt”, created by Data Mosh, fascinated us because it represents the message that the music expresses very well: The conflict. This is solved by the protagonist “abandoning the field” and crossing a counter-current path that leads from Aesthetic Beauty, represented in the video by the Madia Cathedral square, to Ethical Beauty, represented by the church of Purgatory, important for its representations of the various “Memento Mori.”
Produced and Mixed by In A Sleeping Mood with Hate Moss, the “Eremita” also features guest appearances from Donato Panaccio (Bass and Arp Guitars) and Mauro Polito (percussion). It was mastered at Loud Mastering studios by Jason Mitchell.
* * * *
Hate Mossis an Italo-Brazilian duo formed by Tina and Ian in 2018. Formed in London and currently living a nomadic existence, the duo have performed on numerous stages across South America, Europe and the Middle East, while drawing crowds at international festivals like the Venice Biennale (IT), Locomotiva Festival (BR) and Goiania Noise (BR), earning a cult following in the process.

Immersed in the spheres of electronica and post-punk, industrial to electroclash, their music is the result of their multicultural heritage and definitively dark sonic palette. Taking inspiration from the music scenes of the multitude of countries that have welcomed them, the band’s lyrics blend artful observations with fluent shifts in languages and an idiosyncratic sound coloured by instruments they have adopted on their trails.
Hate Moss released their first LP ‘LIVE TWOTHOUSANDHATEIN’ through their label Stock-a production in collaboration with the South American label Discos Rebeldes. It was recorded in one take at Relaxo Studio in Florence, Italy and mixed/mastered at Fine Arts Studios in London, UK.
In May 2022, the duo will release their second album ‘NaN‘. In computing, ‘NaN’ (/næn/), means “Not a Number”, a data type that can be interpreted as a value that is undefined or unrepresentable. The title represents the main theme of the album, which focuses on the alienation that arises when society treats human life as the result of a cold calculation.

Drawing on the mixed heritage of the band, the many strands of musical influence they share, and the upheaval of moving and regrouping during a pandemic, the more commercial musical approach on the second album only serves to give the listener an easier approach to the heavier message of the lyrics.

‘NaN’ was recorded by Andrea Nardoni and Alessandro Bianchi at Relaxo Studio. It was mixed and engineered by Mauro Polito at Fine Arts Studios. The recording of the instruments (guitar, therevox, bass guitar etc) has been entrusted to musicians close to the band: friends, colleagues and ex band mates living in Italy, UK and Brazil.
The album will be released on 20 May 2022 by Stock-a Production (Italy-UK).