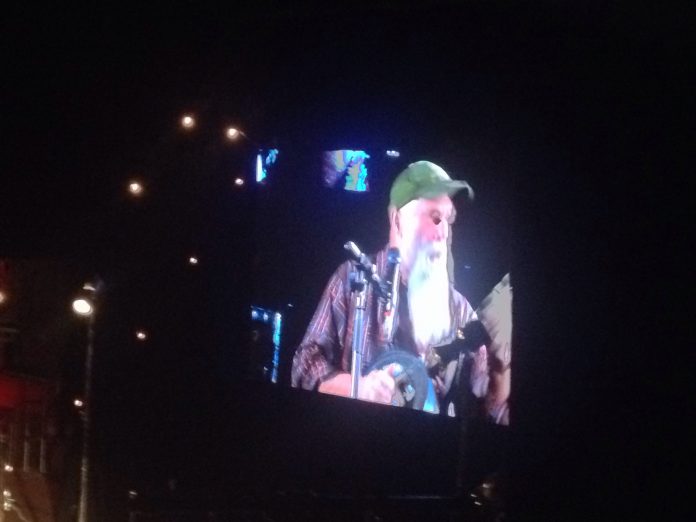 He started out with nothing, now he can fill the Civic. Seasick Steve ends his tour in Wolverhampton

How can we put this? My Baby’s singer Cato van Dyck probably isn’t the first person in Amsterdam to be taking drugs. Not that Ms van Dyck is doing anything she shouldn’t, you understand, it’s just that she’s laid low with flu. “Come to another show if you want to see the real me” she offers up at one point. Actually, even in her under the weather state, impressions of My Baby are pretty favourable. Blusey psychedelics abound and there is kind of pulsing insistence to their music throughout. You do suspect that they’d be happier as some kind of Gov’t Mule or Grateful Dead style jam band, and that’s what they turn into with excellent effect on the closing “Seeing Red.”

Steven Wold – Seasick Steve to his mates – is making up for lost time. He has had the archetypal Troubadour life (according to Wikipedia he and his second wife have lived in 59 houses) and the man who isn’t exactly sure how old he is (73 or 74 is the best he can do) has worked in about as many itinerant jobs as you can possibly imagine, and as he jokes on stage here “I’ve been a convict too….”

Steve’s popularity in this country can basically be traced back to an appearance on Jools Holland over a decade ago. Not that this was a flash in the pan. The Civic Hall is packed to the rafters tonight and if that doesn’t tell you about his enduring appeal nothing else will.
Even still, you sense he means it when, after a few seconds of waving after wandering on stage, he says: “let’s get down to business, shall we?” As though there is urgent business to attend to.
And for the next well over two hours, Seasick Steve, his drummer Dan (a man who seemingly thinks his drums need to be punished by being hit very hard), fiddle player Georgina, and vast array of homemade instruments – which includes a frying pan – get on with that very job in hand.
What they do is gloriously unfussy and uncomplicated, like a sort of more visceral White Stripes, there is something totally real about songs like “Bring It On” and “Summertime Boy” like Steve actually believes he is still busking, just on a massive scale. Certainly he has the roadworn look of a man who hasn’t spent much time in focus groups being told what his music should sound like, preferring instead to play what he feels.
There’s a warmth about his performance too. When a female audience member screams out: “I love you Steve” he grins, seemingly at the very audacity of being a bonafide rock star, “it’s usually guys who shout out, I guess that’s an improvement,” he smiles.
At one point he fetches a woman out of the front row and sings a love song to her (“I’m gonna pretend I’m 45 years younger”) and in so doing, with “Walking Man” he manages to reduce a gig that has 3000 people in to one that might be around a campfire.

He gets his one string guitar out for “Roy’s Gang” and leaves Royal Blood in his dust while he does. Then, when he “gets a little swampy now” with some delta blues, and on “Swamp Dog” he proves to rather good at that too.
In this context “Keep On Keeping On” a song about living your dreams brings with it a touch more resonance than such tracks usually might and the storytelling of “Barracuda 68” grooves along with the biggest riff of the night.

At the other end of scale is a wonderfully tender cover of “Gentle On My Mind” which begins the encore. There is also time for some dark country – or as the man himself puts it “hillbilly shit” – with “In Peaceful Dreams” and “Doghouse Boogie” sees him tell his life story, and there’s a real sense of pride when he sings “I played for change” before pausing and adding: ….”and man, I’m getting serious spare change now….!” Ending with a cover of Joan Baez’s “Silver Dagger” adds a tenderness to things and shows just how versatile the music of Seasick Steve is.

Aside from the genuine warmth onstage here, there’s a moment, about halfway through, that sums this evening – the last night of the tour – up. Seasick Steve takes a swig from his wine bottle and with a look of something approaching a mix between bewilderment and pride says: “You know, when I play the UK, I know who gave me job.” And right from the beginning, when Robert Johnson toddled off with his soul and guitar and made a deal with the devil, the blues has given guys like Steve Wold that opportunity. That’s what makes the music so deeply primal, but nights like this are why people come back to watch it time and again.