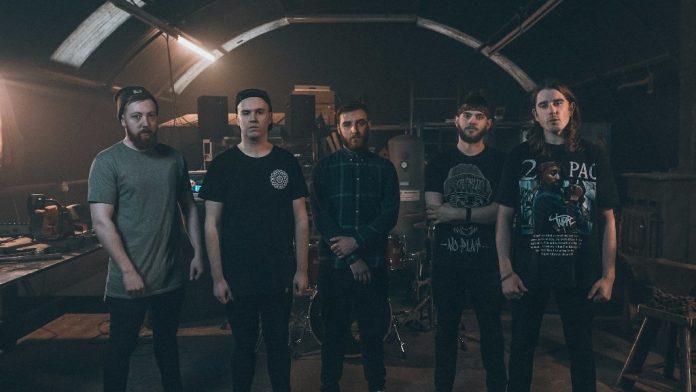 Hailing from the North East of England, groove metal-hardcore mob ALL AT SEA will release their Systemised EP on 13 May.

They have also released new single ‘Gimmie The Mic’, check it out here:

Boasting the gritty aggression of bands like Malevolence and Nasty, with odd plunges into alternative Rage Against The Machine-esque territory, ALL AT SEA really are an anomaly in this terrain. With slow, crushing rhythmic prowess and an excess of unadulterated down-tuned riffs, coupled with plenty of breakdowns, this EP is something to behold as a debut release.

Not much is known about All At Sea, but it is painfully clear that they are fuelled by anger and frustration. Frontman and vocalist Jack Tyreman has a definitive presence, whether utilising his skill at pitched screams, growls or shouts, and is complimented by the aforementioned vitriol from the musicians behind him. His fluency is most prominent in song “Wake”, where the lyrical themes are abundantly clear, and is accentuated wholeheartedly by a crushing breakdown. He eloquently yells; “This f**king system’s a joke. I’m fucking sick of being broke. I want more from my life. I wasn’t born to work and die.”

Having played a number of key shows across the North in 2016 including a support slot with Skindred in Middlesborough, ALL AT SEA are primed to make a huge impression on the touring circuit this year. Expect more dates and news from ALL AT SEA in the coming months – this EP is only going to be the tip of the iceberg.